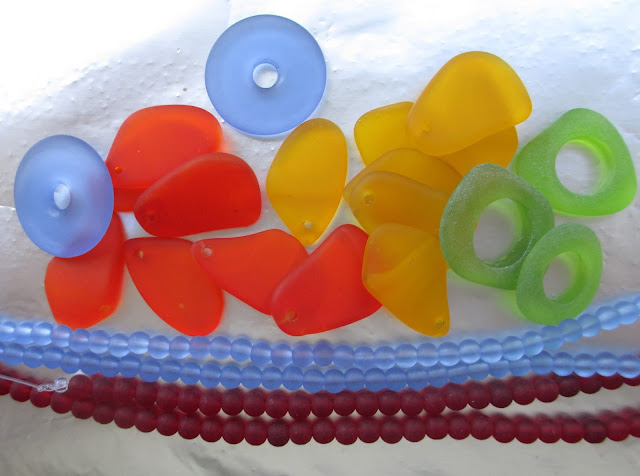 In the midst of getting ready for shows and everything else that's been happening, I got these fabulous cultured sea glass beads from ZNet Shows.  Aren't they delicious? I've designed some sea-inspired pieces that will be in the next issue of Creative Spark magazine -- can't wait to share them!
Posted by Bobbie at 6:00 PM No comments:

I Survived the Show!


This weekend was my first art show in many months, and I went into it with equal parts excitement and dread.  Not dreading the show itself, but worried that after several months away from doing shows, I would forget something crucial, like a vital part of my tent.  Or all of my jewelry.  Or my pants.

I'm happy to report that I did remember to wear pants.  Both days.  Win!

We were supposed to set up on Friday evening at 7:30 (they had to let cars clear out of the town's center before letting the artists invade).  At 6:00, it was raining, with predictions of continued rain and gusty winds until after midnight.  Been there, done that, could do without it again.  So sweet husband agreed to help me set up the next morning at 6 a.m. (putting him on the fast track to sainthood).

The next morning was dry and clear. And early.  Drag-your-butt-out-of-bed-at-4:30 a.m.-to-shower-and-dress early. After setting up, sweet husband went home with all good intentions of not going back to bed.  Intentions that went out the window about 30 minutes after he got home.

Most shows involve a story about a neighboring artist. This time is was the stogie-chomping neighbor.  Mercifully, he didn't light up the big ol' cigar he kept clenched between his teeth.  But he did talk. A lot. Bless his heart, he was so eager to share the stories of his work that he'd chat the ears off his customers.  I saw more than one couple flee, heads down, without a backward glance.  On the bright side, if he'd had to step away, I could have told any of his customers all about each piece from having heard the stories so many times!

There were no jingly men or killer cicadas at this show, but there were a couple of toddler meltdowns, including a hysterically funny moment when a boy who looked about 2 or 3 sat down in the middle of the street and said, very emphatically and in a voice that must have been an imitation of what he'd heard his mother say a thousand times to him, "No, no, no and NO!"  Every parent in the vicinity chuckled.

My learning takeaway of the weekend was just how rough I look at the end of the day when I've been up and working hard since 4:30.  It was not pretty.  On the bright side, I slept REALLY well!

The best line of the weekend had to come from a lady who, after looking at some of the beadwoven pieces said, "I appreciate that you price your work according to the Pain In The Butt factor that was involved."  So my new pricing formula may be 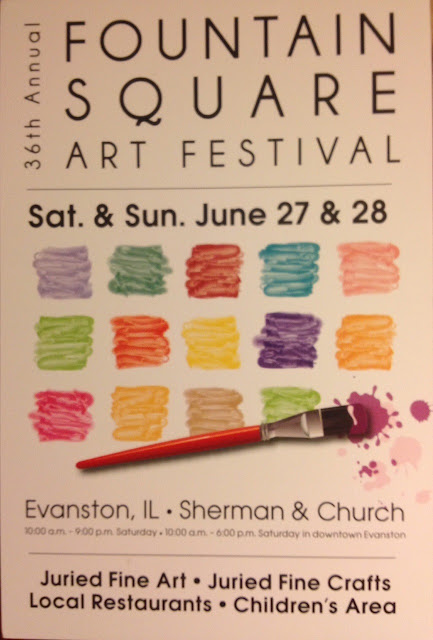 My first show of the season is this weekend!

Keep in mind that I haven't done a show in a good nine months, and have moved in the intervening time.  My fingers are crossed that I haven't forgotten any major component of the setup, and that I still remember where everything goes in the tent.

Like any show prep, there are a thousand and one little details that still need attending to, but I'm getting excited about getting back in the show routine.  And I'm interested to see what kind of good stories the weekend brings (hopefully no giant bugs or surprise thunderstorms, but you never know!)

But if you're in the Chicago/Evanston area, come see me!  Whatever happens, I'll share my show tales with you here next week!
Posted by Bobbie at 2:56 PM 3 comments:

Wherein We Recuperate from Bead and Button Shopping

Holy cow.  Y'all, I have been to some big bead shows in my day, but nothing quite prepared me for the wonder, the spectacle, the complete eye candy overload that was the marketplace of the Bead and Button Show.

Now, I used to live in Milwaukee, a mere hop and skip from where the Bead and Button show is held. But the annual show wasn't started until a few years after I moved away.  (I've always taken that a little personally.)  And I've always had it on my bucket list to go. When I moved to Chicago this year, it became a much more likely possibility.

So Sunday, I headed up the road. Got to the Wisconsin Center right as the show opened.  I was ready. Or so I thought. After two hours, I had only made my way through two rows of about seven or eight. And I had only four hours left. That's when I kicked it into high gear and power shopped.

Knowing that it would be WAY too easy to spend too much, I had decided that I would only shop for things I couldn't find at home or at regular bead shows.  So I concentrated on art beads, special findings, and things that I knew I'd kick myself the next day for not buying.  No seed beads (gasp!!), no Czech glass, no gemstone beads.  Ready?  Here goes:


And the art beads:

Time for the true confession - there were also some less visually exciting purchases, like lots of chain, some gold filled wire (now that the price has come down to nearly human levels), and some ultrasuede for backing.

If you ever have the chance to go to Bead and Button, you should go.  One of these days my schedule will allow me to go for some classes as well, but for now, I've got this one crossed off the bucket list. And I'm already planning for next year's journey!
Posted by Bobbie at 6:08 PM 6 comments:

A Time To Stitch 7 - Meet Pansy and Iris 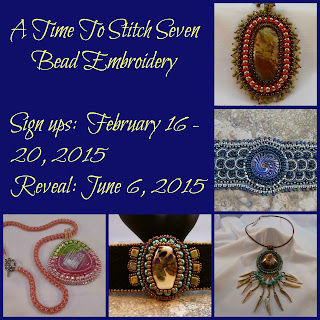 Anyway, two of the most creative beady ladies I know, Christine and Therese, occasionally reach out to pose a design challenge, focused on a particular beadweaving stitch or technique.  This time, it was bead embroidery.  And boy, was I in need of a kick in the creative pants!

Now, bead embroidery and I are old friends. I love combining it with beadweaving to make pieces like this and this and this, and the first necklace here.  I had visions this time of making another ginormous piece.  Of spending hours after coming home from work, beading happily away.

So I dug out some colorful glass cabochons from the stash, and let their bright colors inspire me. I used some faceted firepolished glass, some lentils, and some magatamas to spice up the mix of sizes and shapes. I'm happy to introduce Pansy and Iris.

Pansy is a sweet little round-faced confection of purples, gold, and shades of green.  Like the cheerful flower that inspired her, she's a concentrated little burst of color.  And, if you know me at all, you know that anything purple has me from the get-go. 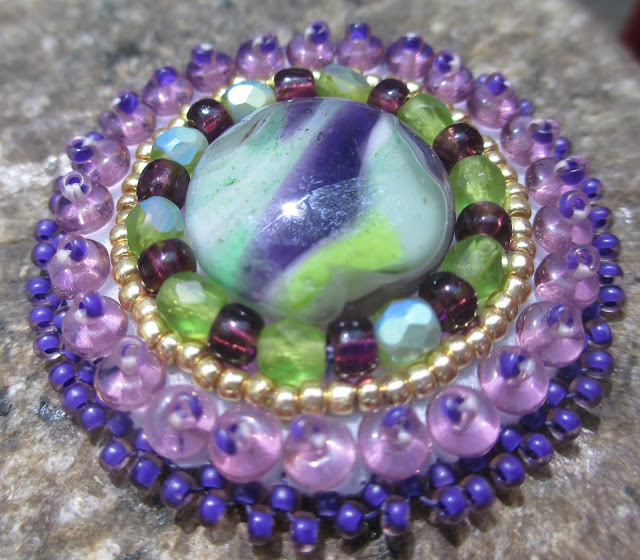 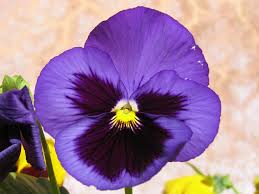 And Pansy's slightly less demure cousin, Iris.  Iris is a bit of a show-off, with her extravagant swoops of petals, but her unusual blue color makes her a star in any bunch. 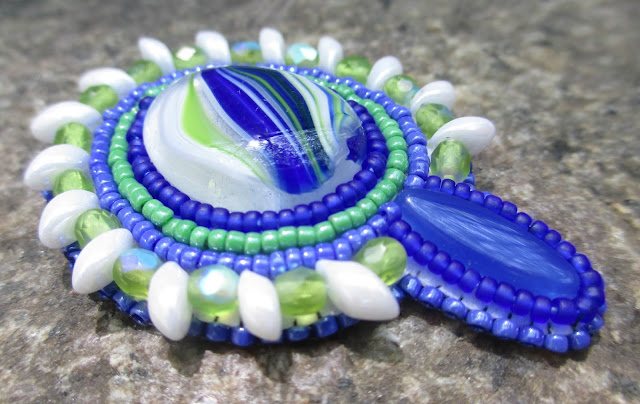 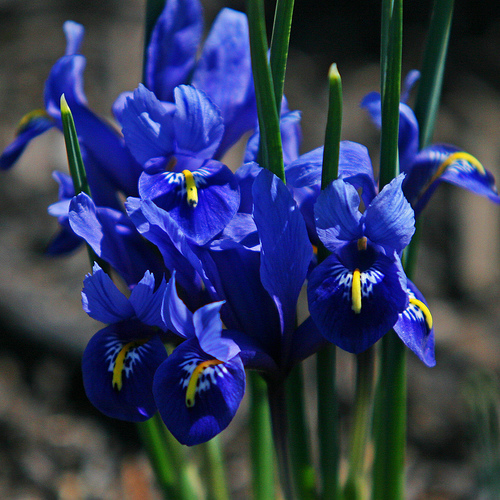 Both will eventually have a woven bail added to them so that they can live on as necklaces, but for now, we'll just say they're in their bud phase, not yet fully blossomed. 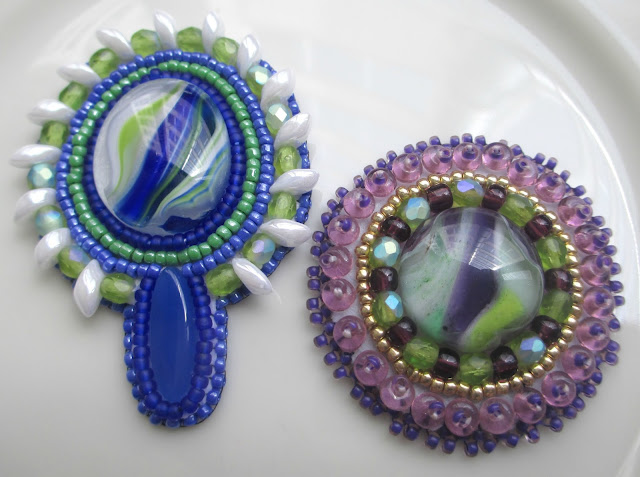 Now before I torture any metaphors any further, here's the list of the other participants in the Time To Stitch 7 challenge.  Go, enjoy, get inspired.  Thanks to Therese and Christine, and thanks for stopping by!