The Daffodils Are Coming! 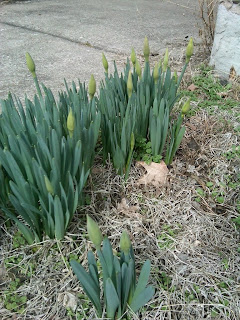 We had a couple days of beautiful, warm weather, and now it's back to chilly, rainy gray days. You know, normal weather as we move from winter to spring.

But these lovely harbingers of what's to come are in my yard. I'm going to pull out the spring colored beads in my stash and start getting ready for the season just around the corner!
Posted by Bobbie at 2:39 PM 2 comments:

Searching For My Flip Flops

The weather today is gorgeous. Flat out, full sun, warm your bones, find some sand to wiggle our toes in, play hooky from your obligations gorgeous.


It's putting me in a summertime mood. Even though I know we're probably going to get hit with at least one more cold spell and maybe more snow before it's well and truly Spring, I'm starting to feel like I should get ready for summertime.


This necklace, which is named "Salsa Spiral," captures the feeling of today perfectly. Can't you just feel the warmth of the sun on your face? (and for the beady folks, it's tubular netting and Dutch spiral - breezy fun!)


And really, if we're talking about getting ready for summer, putting on a necklace is so much easier than exercising to look good in the bathing suit... 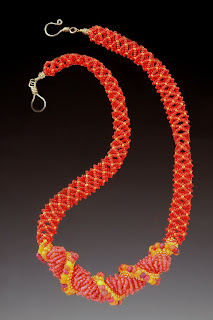 Posted by Bobbie at 1:29 PM No comments:

Most artists and crafters I've had the privilege of knowing have certain things in common. A drive to create. A sense of fun and discovery, and often, a wicked sense of humor. A wonderful smile that comes over their faces when they think of a new box of 64 Crayola crayons. A stash of unfinished projects, lurking somewhere in their house, waiting for that elusive spare time to be taken back up...

And then there's the love and appreciation of the work of other artists' work.

Eye candy. Food for the creative soul. Recharge of the inspirational battery.

Need a little jolt of your creative juices? Here's a great site I stumbled on a couple of months ago:
Daily Art Muse.

Check it out. You'll be wowed. You'll be excited. You'll be stunned. But you will never be bored. And guaranteed, you'll want to run right to your work table and make something.

Enjoy!
Posted by Bobbie at 8:28 PM No comments: 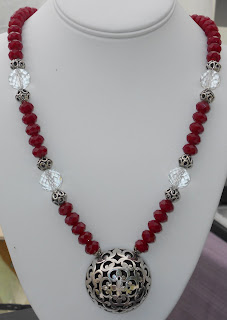 So a while back, I went to an antique mall and found some fabulous sterling silver clip-on earrings. From the size and the look of them, I figured they were from the 60's or 70's. I blogged about them, and the other treasures I found that day back in February of last year (my, how time flies!).

They were also pretty hefty in size. Flip one over and you could almost serve cocktails from it. These belonged to a bold woman back in the day. Not really in style anymore.

But to me they screamed "focal piece."

And then they lived on my bead table for a couple of months.

This photo shows what I did with one of them -- paired it with luscious faceted ruby red crystals, vintage clear crystals, and Bali silver.

I'd have taken a better picture of it, but it went to a gallery soon after it was made, so I only have this shot taken with my phone.

No to go figure out what to do with that other earring....
Posted by Bobbie at 7:28 PM No comments:

A Box to Berea 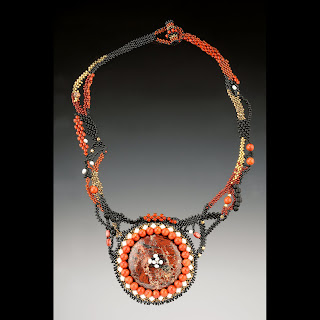 Today, I sent off a necklace to be included in an upcoming exhibit at the Artisan's Center in Berea, Kentucky. The exhibit is Works by Members of the Kentucky Guild of Artists and Craftsmen, opening March 5 and running through August 20.

The Artisan's Center is one of the greatest one-stop-eye-candy-overload-places you can imagine. It's chock full of some of the finest artisan crafts you'll find. Honestly, I have done some serious damage to my wallet shopping for gifts in their shop, and enjoyed every moment.

To say I'm thrilled to have a piece in an exhibit at this location is like saying the East Coast has seen a couple of snowflakes this winter.

"Understatement" doesn't even begin to cover it.

Or, if you're ever driving on I-75 in Kentucky, by all means take exit 77 and treat yourself to a wonderful hour or so of great art. I promise you won't be disappointed.
Posted by Bobbie at 7:39 PM No comments:

A lovely customer of mine has been cleaning out her mom's basement, discovering some beautiful vintage jewelry and clothing that belonged to her aunt and other family members. She passed along a number of the pieces to me, saying, "Have fun and see what you can make out of these for me."

Seriously. Can you believe the luck?

It's like the Bead Fairy opened up her sack and said, "would you like some free goodies to play with?"

Among the goodies was a set of star-shaped buttons from an old cardigan, and a rhinestone necklace that was beautifully retro but not her taste. Here's what I had to work with: 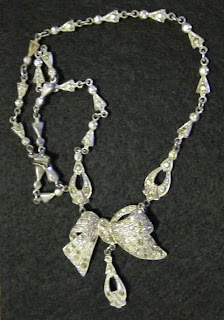 She requested a bracelet from the buttons, and gave me free reign to make anything I could figure out from the necklace. The buttons turned out to be a real challenge, since they were slightly domed with a concave back, and were quite heavy for their size. The trick became finding other beads that would snug up to the shank of the button, while allowing for the curvature of the button's body and supporting the weight enough to prevent the buttons from flopping around.

After a few (okay, five or six) false starts with other designs, I finally settled on some black faceted Czech glass beads in a multi-strand weave. I left the construction of the clasp ends of the bracelet flexible enough to allow me to adjust the finished piece to the customer's wrist. Here's the final product:

The necklace had so many fun components to use. I used the bow as an asymmetrical bit of sparkle in a necklace of faceted, rutilated quartz beads. And forgot to take a picture of it (FAIL). But here is a pair of clip-on earrings from other part of the necklace:

They have the same faceted Czech glass as the button bracelet, so she can wear them with the bracelet or the necklace if she wants.

Big, big, sparkly fun! Next time I'll have some jewelry with more than just silver and black, I promise.

And I've encouraged my customer to go treasure hunting in that basement again soon!
Posted by Bobbie at 6:15 PM No comments: