Casablanca - or, How I Finished Another UFO

Sometimes I bite off more than I can chew.  Now when it's, say, pecan pie or a Snickers bar, I muddle through.  When it's a beading project, however, sometimes I have to put it aside for awhile until I can screw my courage up enough to tackle it again.

In the last Bead Soup Blog Hop, I took one of those bites, and among the pieces I made was a medallion that was heavily encrusted with bead embroidery, using the delectable soup sent by my fabulous partner Nancy Dale. 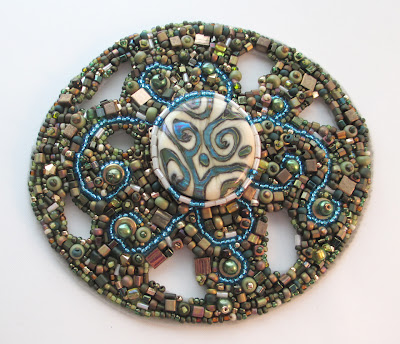 It ended up being about 4 1/2" across.  That, my friends, is a lot of embroidering. It was enough to make my husband say "woah!!" when he saw it.  And as much as I loved it, I was burned out on it for a while.  That, and the prospect of stitching the edging on those little cutouts on the interior of the piece was kind of freaking me out.

So the other day I was in the fabric store, and decided to pick up some ultrasuede to back the medallion.  A few hours later, here's what I had: 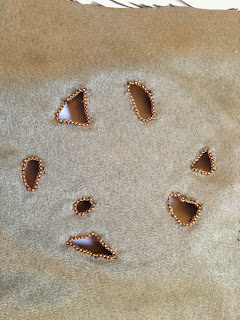 This is the back view (thank you, Dr. Obvious), so you could see the finishing of the interior openings.  Yep, those are 15's lining each one, and I'll admit it, there was some cursing involved as I worked to slice the holes in the backing and fill those tight little spaces with beads.  Trimmed up and edged on the front, here's the completed medallion: 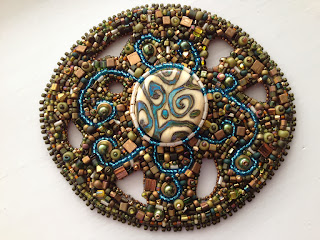 Okay, so that was done.  Now, how to make it into something wearable.  I had some bead soup left over, so I made a couple of beaded beads.  Because I used the random beads in the bead blend from Nancy, they were a little freeform, and a little funky.  Then I raided my stash for some cool copper beads that also had interior openings that echo the openings in the medallion.  Some cool pinky/coppery freshwater pearls, and a copper toggle I made to work with one of the copper beads as a clasp, and I was done: 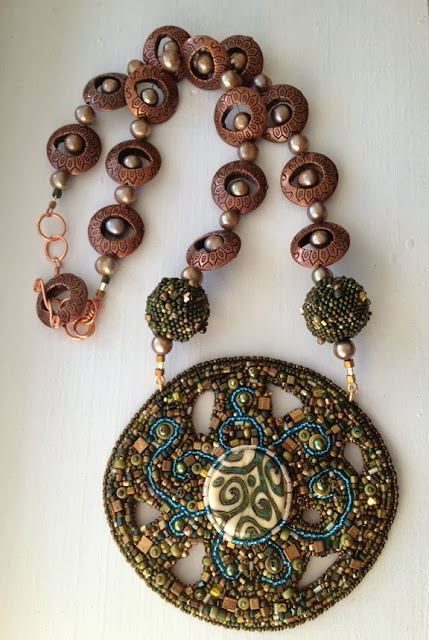 Granted, this is not a necklace for a woman who's uncomfortable being noticed.  But it is surprisingly light and completely comfortable to wear. I've called it Casablanca, because it reminds me of someplace exotic and warm, someplace that the desert breezes might mold the sand into serpentine dunes like the lines on the gorgeous JulsBead at the center of the medallion.  Maybe it's something that would be worn by the genie that comes out of the lamp you'd discover on the caravan trail as you cross that desert.

In any event, this has been a grand adventure, and I'm very pleased with the results. Thanks, Nancy, for the fantastic inspiration of your soup!
Posted by Bobbie at 5:00 PM 9 comments:

A few months ago, some members of the design team for ZNet Shows were invited to take part in a challenge -- the theme was Rings and Bling.  If the chance to choose components from their wide inventory to work with wasn't enough, everyone's creations were going to be included in an online publication, Creative Spark.

Needless to say, I jumped (in an enthusiastic if not entirely ladylike way) at the chance.  I scrolled through the website making selections, sketching ideas as I went.

The earrings above are just a taste of what I made.  I got to do some beadweaving, some stringing, and even some wirework.  The necklace below may end up being an early Christmas gift from me to me -- you never know!  I've been a good girl, I swear.  Just trying to help Santa out, you know...

Creative Spark was edited by the multi-talented Hope Smitherman, and she did a fabulous job.  I'm thrilled to be included alongside some of my favorite designers.  Go check out the ringy, blingy eye candy everyone made.  I'm on pages 53 - 59 (got a little carried away with all the yummy components!).
Posted by Bobbie at 7:57 PM 5 comments:

Made Possible By Advil

Y'all, yesterday was one of those days.  What I thought was a mild headache when I woke up turned into something that felt like a small herd of elephants had taken up residence in my skull.

So even though I had planned on spending the day in close and meaningful communication with my beads, I spent it instead piled up on the bed, eagerly awaiting the next dose of Advil.

By the evening, I was able to move both body and head without muttering words that would have made my grandmother blush.  And of course, there's really no better therapy to feel better than to do something you love...so here's what came from my therapeutic beading last night.  Nothing terribly complex, but they made me happy -- I hope they bring a smile to you, too! 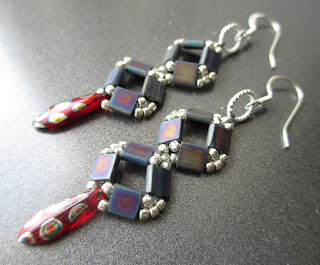 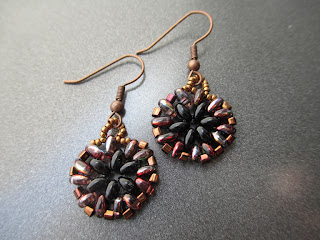 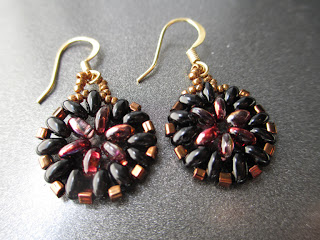 Better beading through pharmeceuticals, that's what it was...
Posted by Bobbie at 2:56 PM 6 comments:

Long Weekend In The Workroom

Happy Labor Day, everyone!  I hope you've had a chance to relax a bit, doing whatever makes you happy for a while.

My workroom looks a bit like a bead bin exploded, but that's just a sign that I've been having some fun.  I'd show you a picture of the room, but seriously, I don't know how strong your stomach may be, and I don't want to cause anyone unanticipated visual trauma.

So here's something that I hope will be a little less visually jarring: 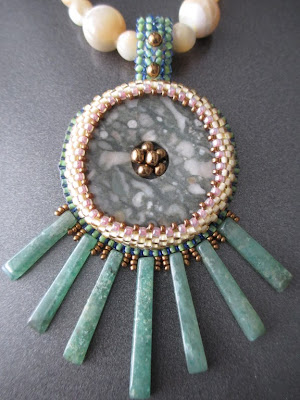 The agate donut had been sitting in my UFO pile forever, attached to a piece of backing in prep for a bead embroidery class I was going to teach, um, over eight years ago.  Class didn't happen, and so little donut sat there, forgotten and unloved and unembroidered, for a long time. 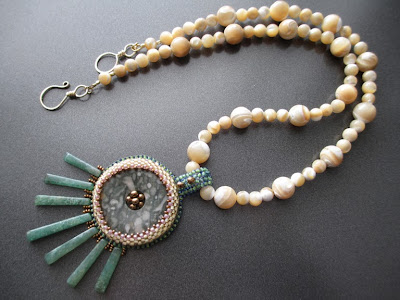 What else is working on the table?  I'll be posting those in the next couple of days!
Posted by Bobbie at 1:34 PM 7 comments: