Midweek, and I'm feeling a bit frantic -- we have house guests coming in to town for Kentucky Oaks, so there is laundry, cleaning, grocery shopping, and general logistical planning going on. Not a lot of time for inspired jewelry making, so I hope you'll forgive me if today's post includes a necklace I made for a ZNet Shows challenge.

One of the coolest things about the Kentucky Oaks, other than the fact that it's the day before Derby and attracts more of a hometown crowd (although that doesn't make it any calmer, smaller, or less fun), is that Churchill Downs has started using it as an occasion to promote breast cancer awareness.  Everyone is encouraged to wear pink, there is a parade of breast cancer survivors on the track before the Oaks stakes race that day, and the flower blanket for the winner is made of gorgeous stargazer lilies.

So with that in mind, today's theme is pink.  Here's my inspiration hat, found in a local department store. 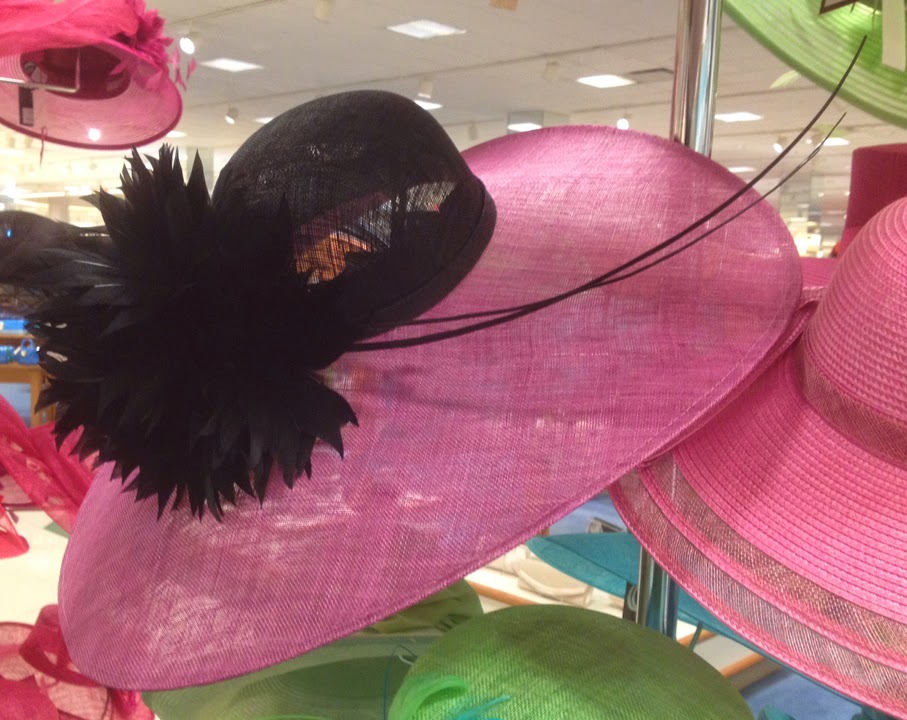 What caught my eye with this hat was the great contrast of the black against the pink, which helps the hat be more sophisticated than girly. And those thin feathers swooping out of the flower are like a little exclamation of "yeah, I know I'm fabulous".

I suppose that pink/black contrast is one that resonates for me, because I made this necklace recently for ZNet Shows. Also a feminine, but not too cutesy, take on pink. 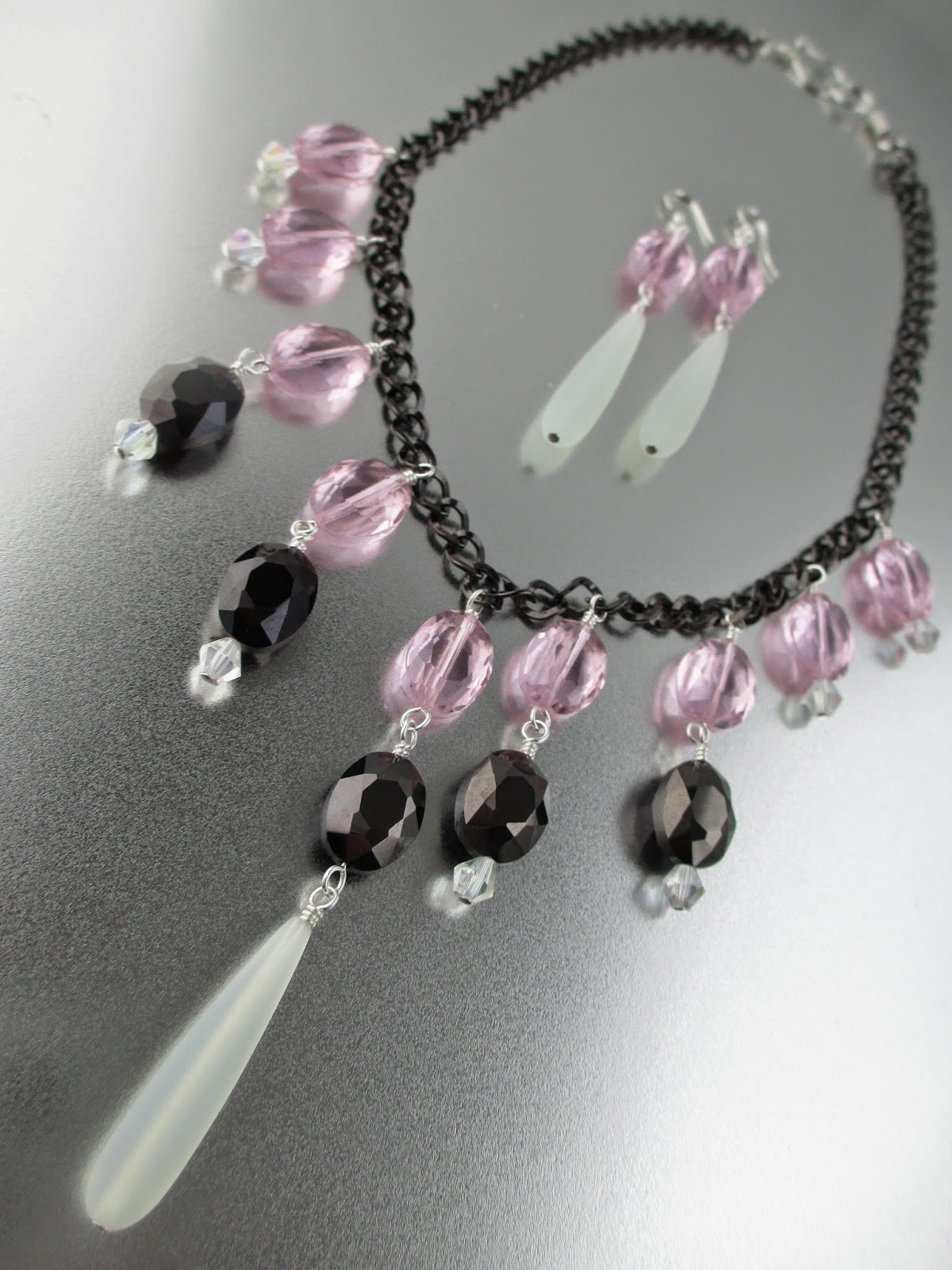 And because just one hat per day is not nearly enough, here are a few more ways people interpreted the "pink" theme: 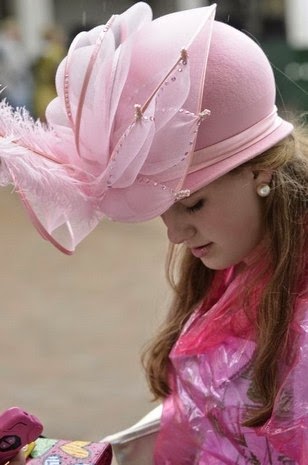 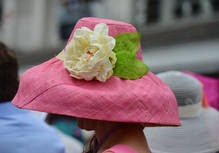 No great insights today, just a really pretty color combination captured in a fabulous hat spotted at Churchill Downs last year. High fashion, great color sense, and a ready supply of quill pens at the back in case you need to sign an IOU for the amount you lose in Race 3. 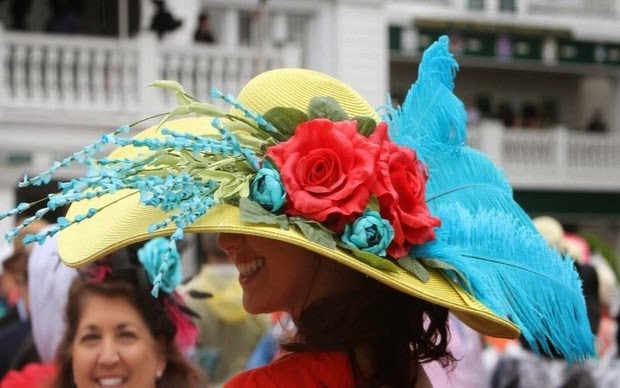 These earrings came together as I was putting together a selection of work for a local gallery. I love these colors together, and was thrilled to discover that they were such a good match for this hat. 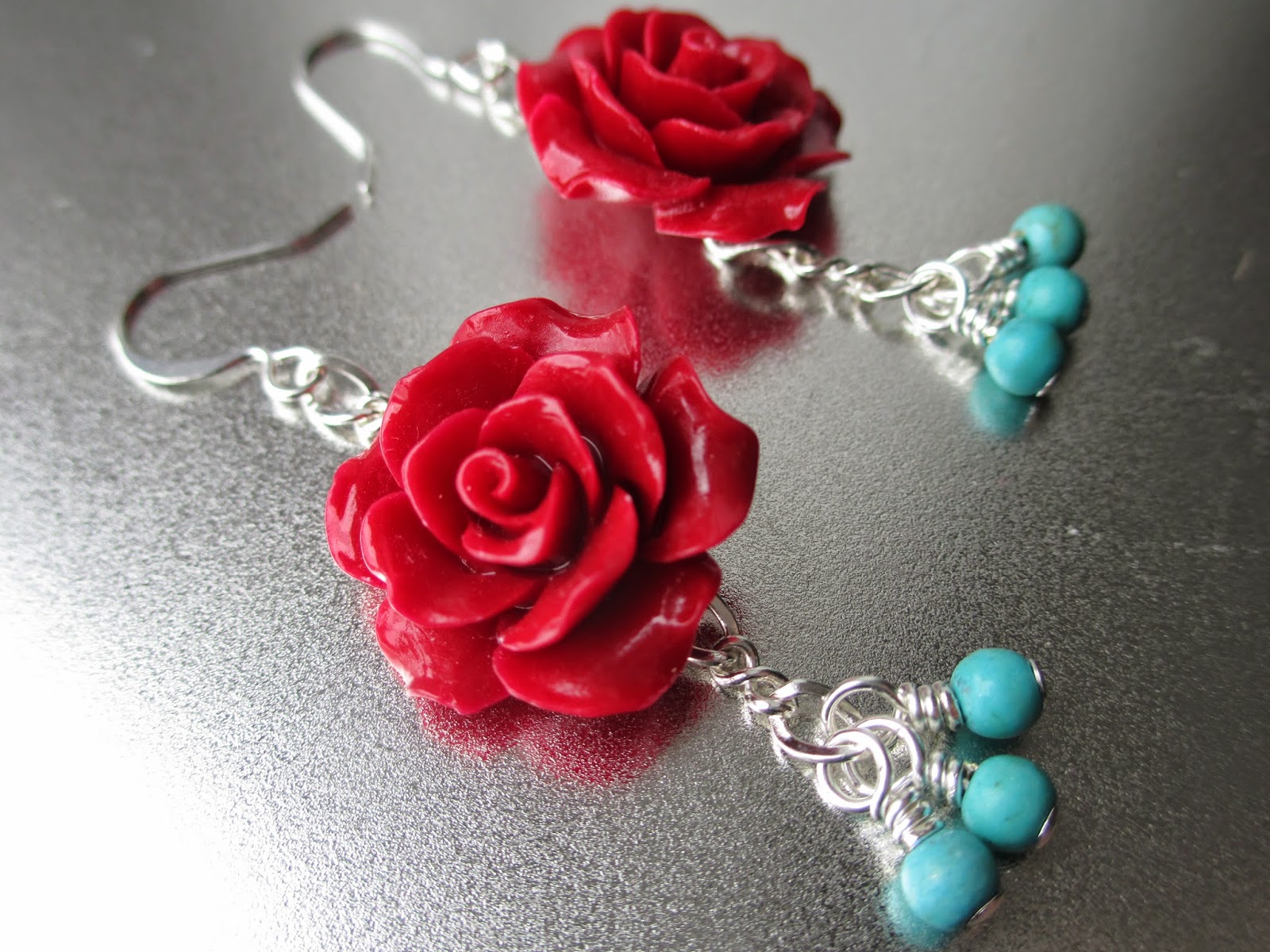 There are others among us who love hats, and Antiquity Travelers created a Pinterest board last year that features the beautiful, the sculptural, the fantastic, and a few that will make you say, "huh?!???" Lots of loveliness from Audrey Hepburn (style incarnate) and Downton Abbey to feed your hat inspiration need.

Before I leave you today, here's my current favorite crazy hat.  It looks like a pheasant and this woman were travelling in opposite directions at high speed, and the pheasant lost. I crack up at the model's expression of, " Darling, everyone knows bird butt is this season's fashion must-have accessory!". 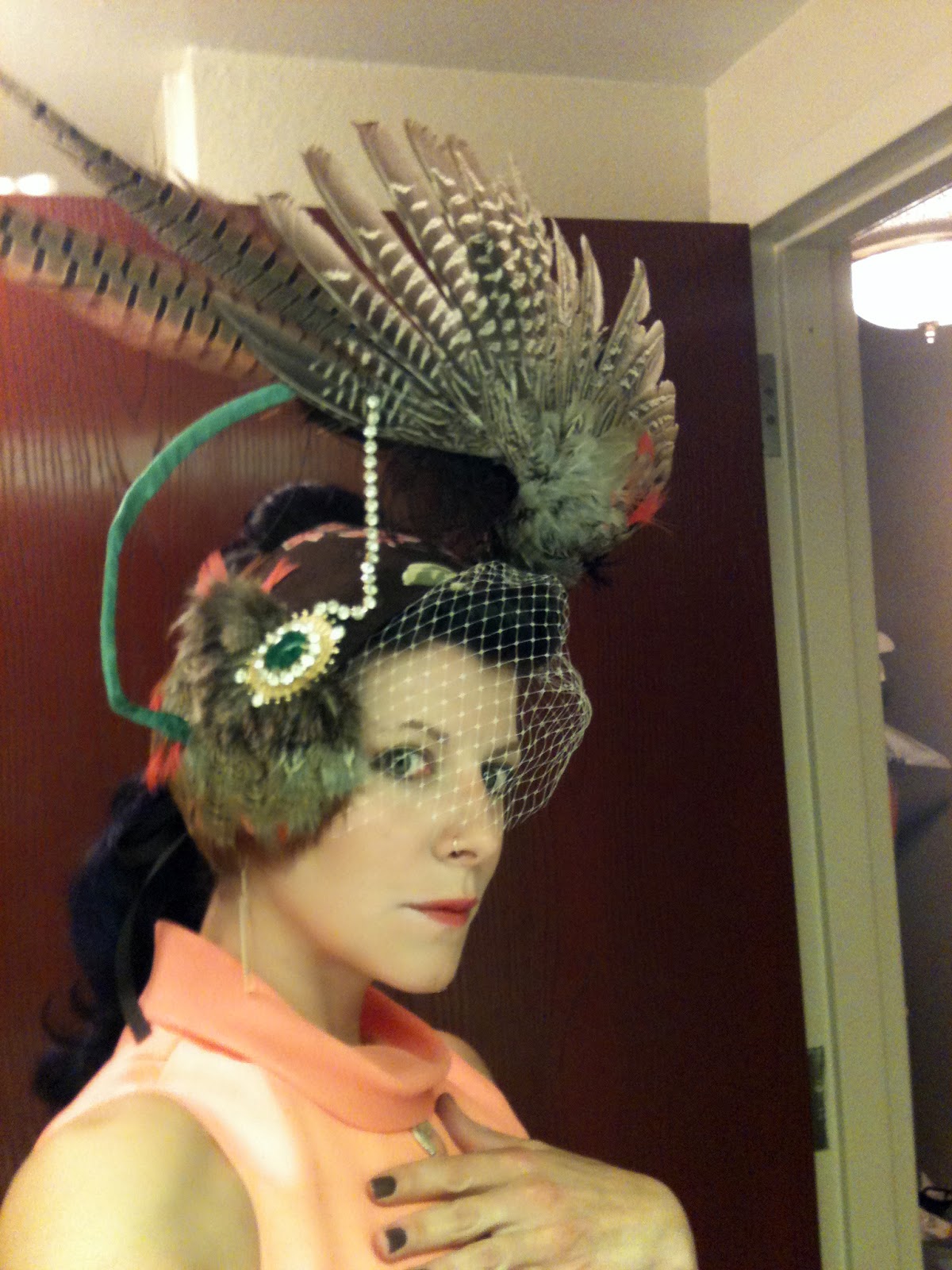 It's day three of Hat Week! As we round the track into Derby, I thought I'd share some of my wisdom about wagering on the horses (also known as "how to lose money FAST")

Some people pore over the racing forms, analyzing the records of the horses, the condition of the track, the record of the jockeys, and the phase of the moon.

I go much more scientifically. The color of the jerseys, the catchy name of the horse, any theme that seems to run through the entries.

(True story: I was at an event at Churchill Downs a few years ago, and there was a jockey named Jesus riding a horse named Altar Boy. That was a pretty good convergence of jockey and horse.  But when I saw a couple of nuns who were attending the same event betting on this one, you'd better believe I was in the line right behind them. And yes, Altar Boy won.)

Anyway, I do not have a foolproof, successful method for winning at the track, but I do bet based on the colors of the jockey silks fairly often. So in honor of this fail-proof (ha!) method, I thought today's hat/jewelry combo should be based on color -- specifically turquoise and brown.

Look at this fabulous hat!  It's a fashion statement and a feat of engineering. 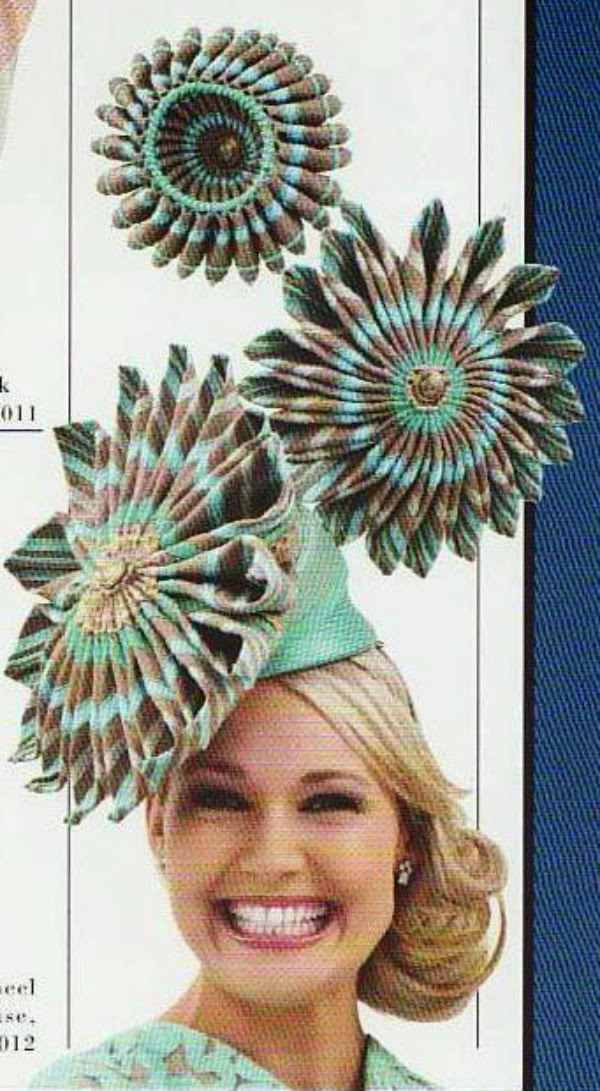 And my necklace -- a peyote flower, nestled among turquoise howlite and brown Czech glass druks. 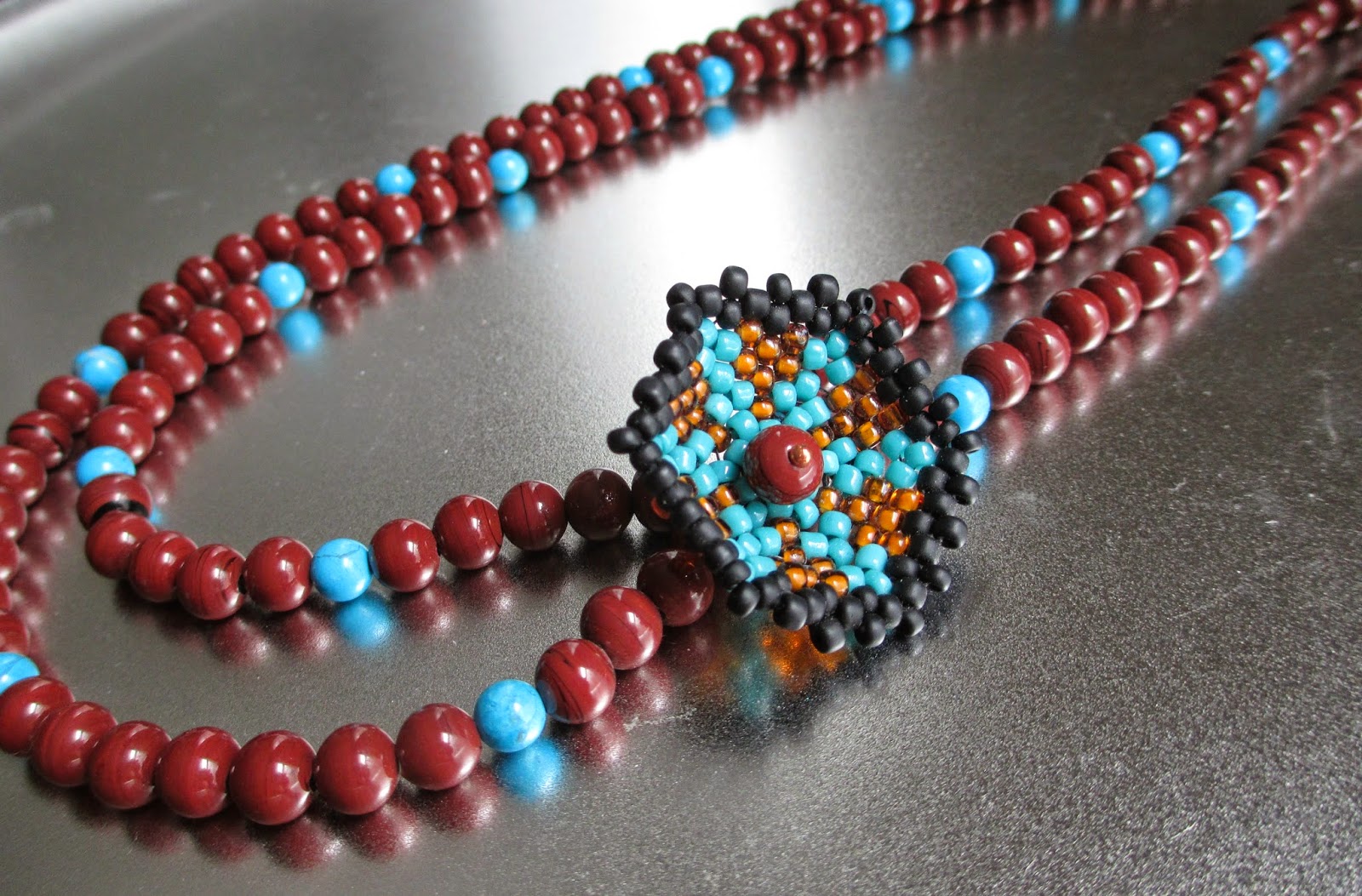 Again, the necklace would be a little easier to fit into the car on the way to the races, but the hat would certainly get you more attention!
Posted by Bobbie at 7:37 PM 3 comments:

It's Day Two of Hat Week.  If you need the background, go here.

One of the hallmarks of Derby hats (and frankly, the part that's the most fun) is that it's an excuse to wear fantastic, flamboyant, flowery and feathery concoctions that you would never DREAM of wearing any other time.

Here's a fascinator I tried on yesterday, in a search for something to wear to a Derby event this week. I loved it on the display, but sadly, it looked like Big Bird's flashy relative had died on my head. But that doesn't mean that I couldn't find a piece of jewelry that I've made that reflects that fascinator's colors, spirit, and elan! 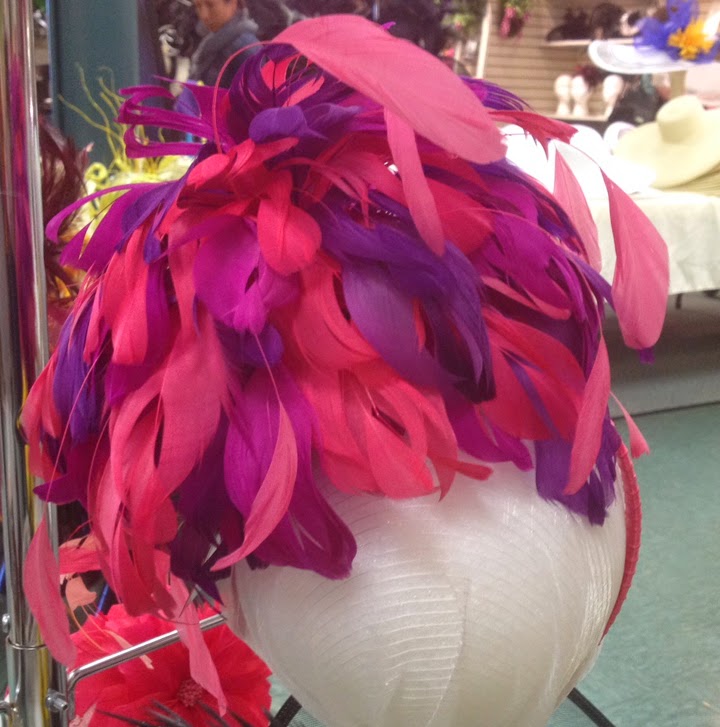 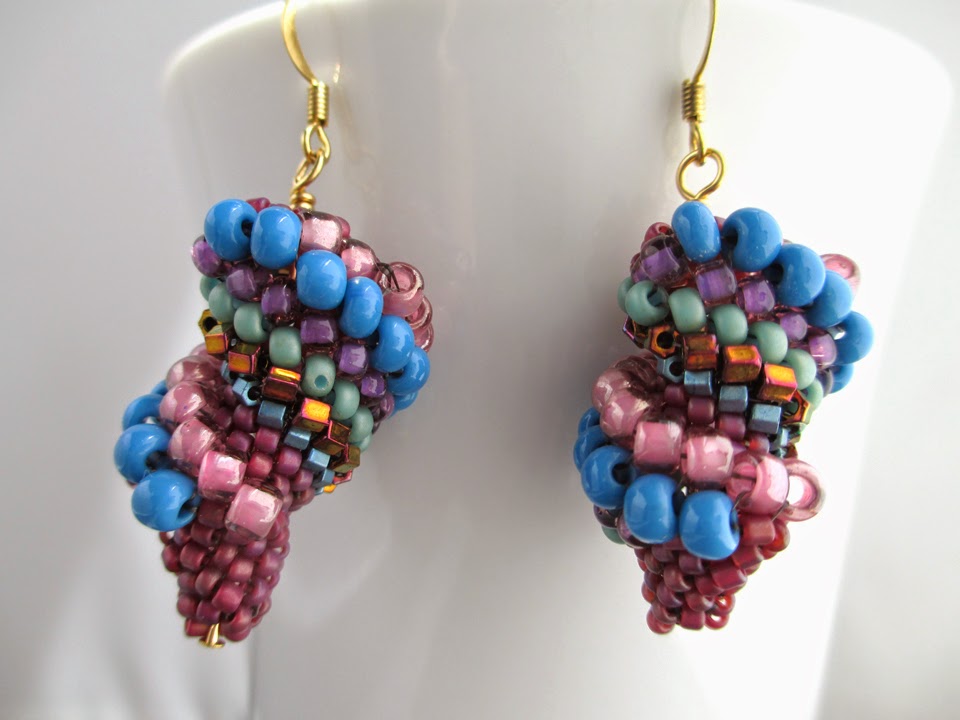 As fun as both of these may be, I would not recommend wearing them together.  I mean, even at Derby, there's a limit. (Snork!)  And to prove my point, here are some understated little numbers women have sported to past Derbies (I continue to be flummoxed as to how they fit these things in the car to get to the track...): 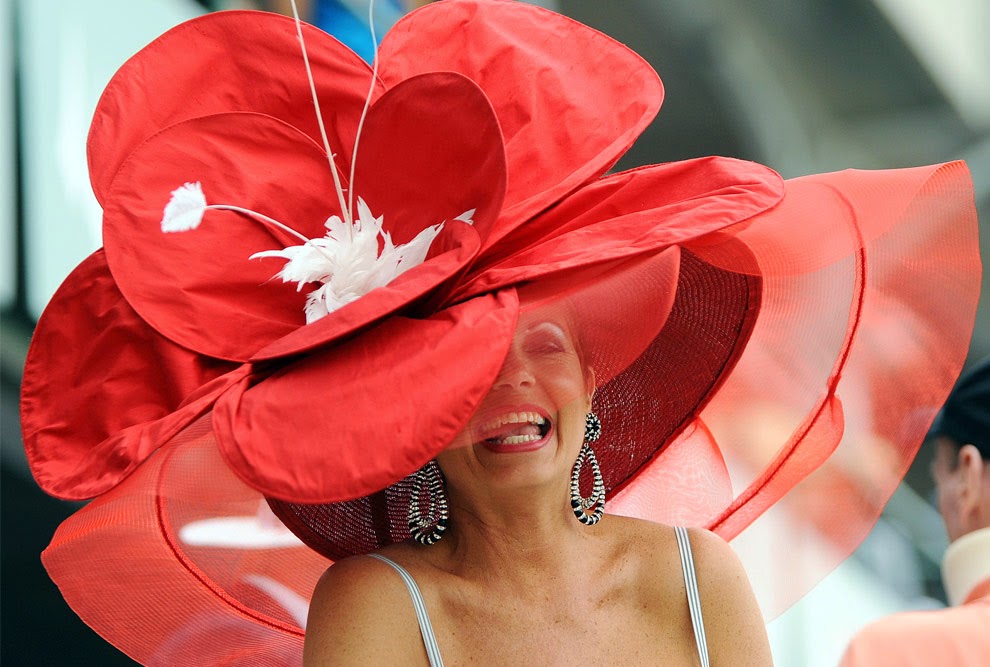 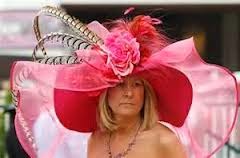 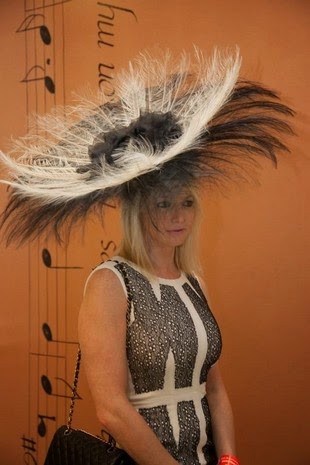 No Hop This Year, But It's Time For Hat Week!

If you've been around here for a while, you may have encountered my obsession with hats.  It's mild, I swear. Mwahahahaha!!!!!!

Seriously, I never knew how much fun hats could be before we moved to Louisville and encountered the millinery explosion that occurs around the Kentucky Derby each year. Beginning around March 1, nearly every store in the city has some hats for sale. I think the only places that don't have a hat display are McDonald's, AutoZone, and (maybe) Verizon.

A couple of years ago, the run up to Derby and the royal wedding coincided, so I decided to declare a new holiday, Hat Week. There was a week of posts, here, here, here, and here, for example.  Last year it expanded to include a challenge, called Hats Off (do yourself a favor and check out the work of the participants, linked at the end of that post), with the reveal day on the same day as the Derby.  This year, however, the Kentucky Derby is the same day as the BSBP8 reveal day, so no Hats Off challenge this year.

BUT, it's just too much fun to use Derby hats as inspiration (even though I get the stink eye from store clerks as I whip out my camera), so as we all gear up for the worldwide BSBP reveal next Saturday, I'm going to have my own celebration of Hat Week.  By all means, if you want to join the fun, let me know, and I'll link your hat/jewelry pairings. And just to lure you all into the obsession with me, I'll include some pictures of other fabulous hats that I've found along the way.

To open the week, a beautiful yellow and black hat. 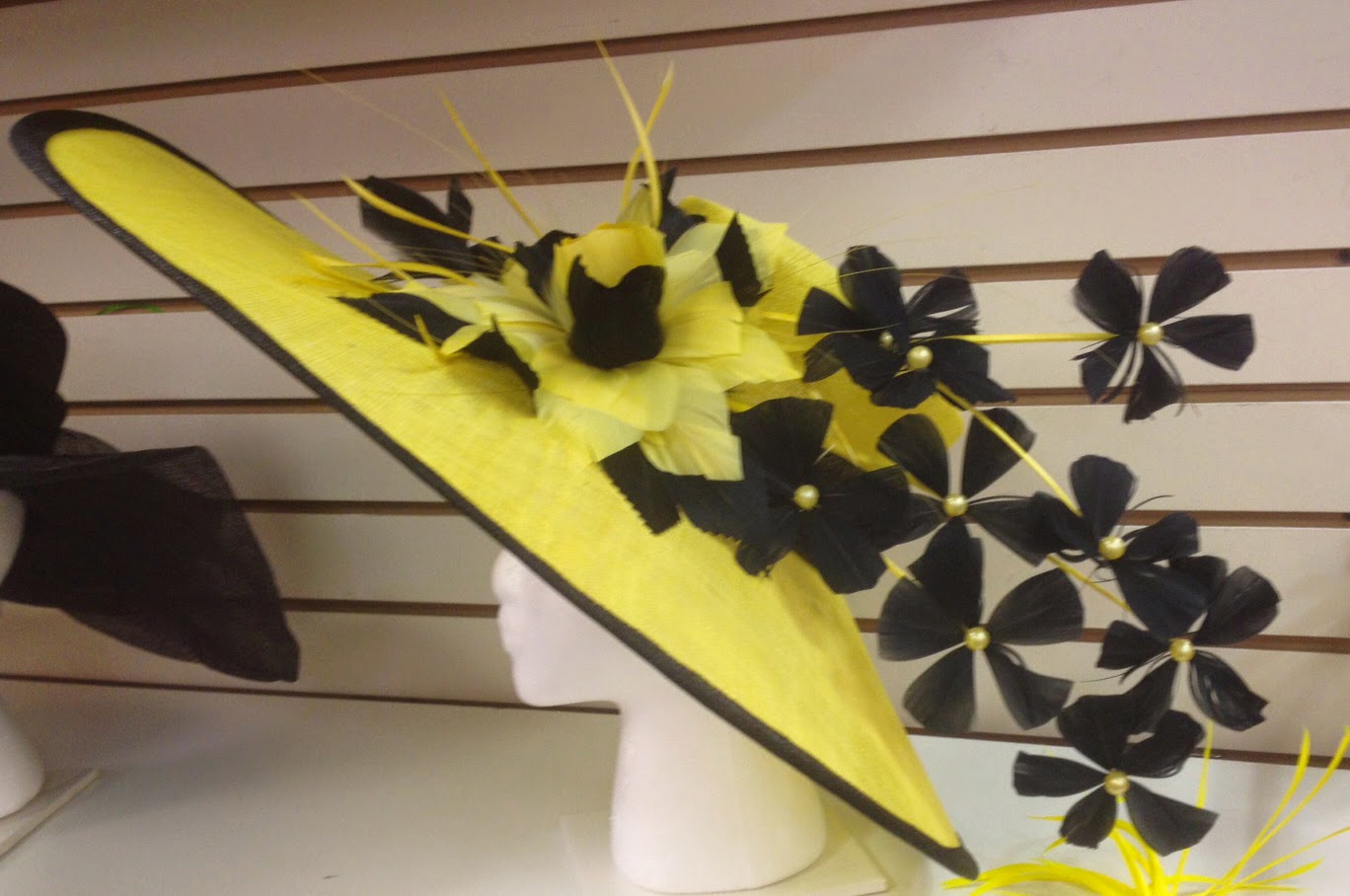 I love the contrast of colors, and the flowers somehow remind me of butterflies or some other flying things. My jewelry interpretation of this sunny beauty is these earrings: 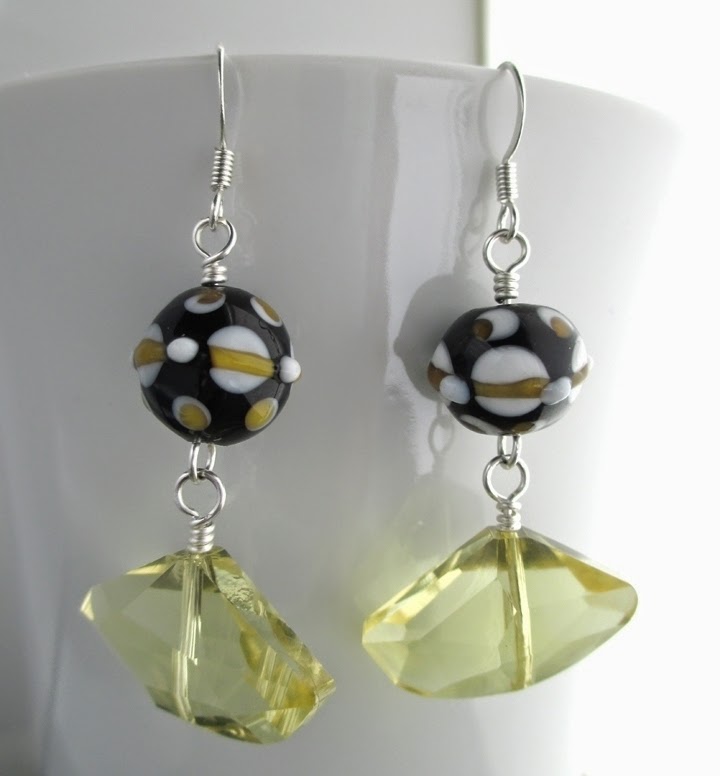 And here's a little something extra -- a photo I took of hats "spotted in the wild", worn at the Kentucky Oaks last year. 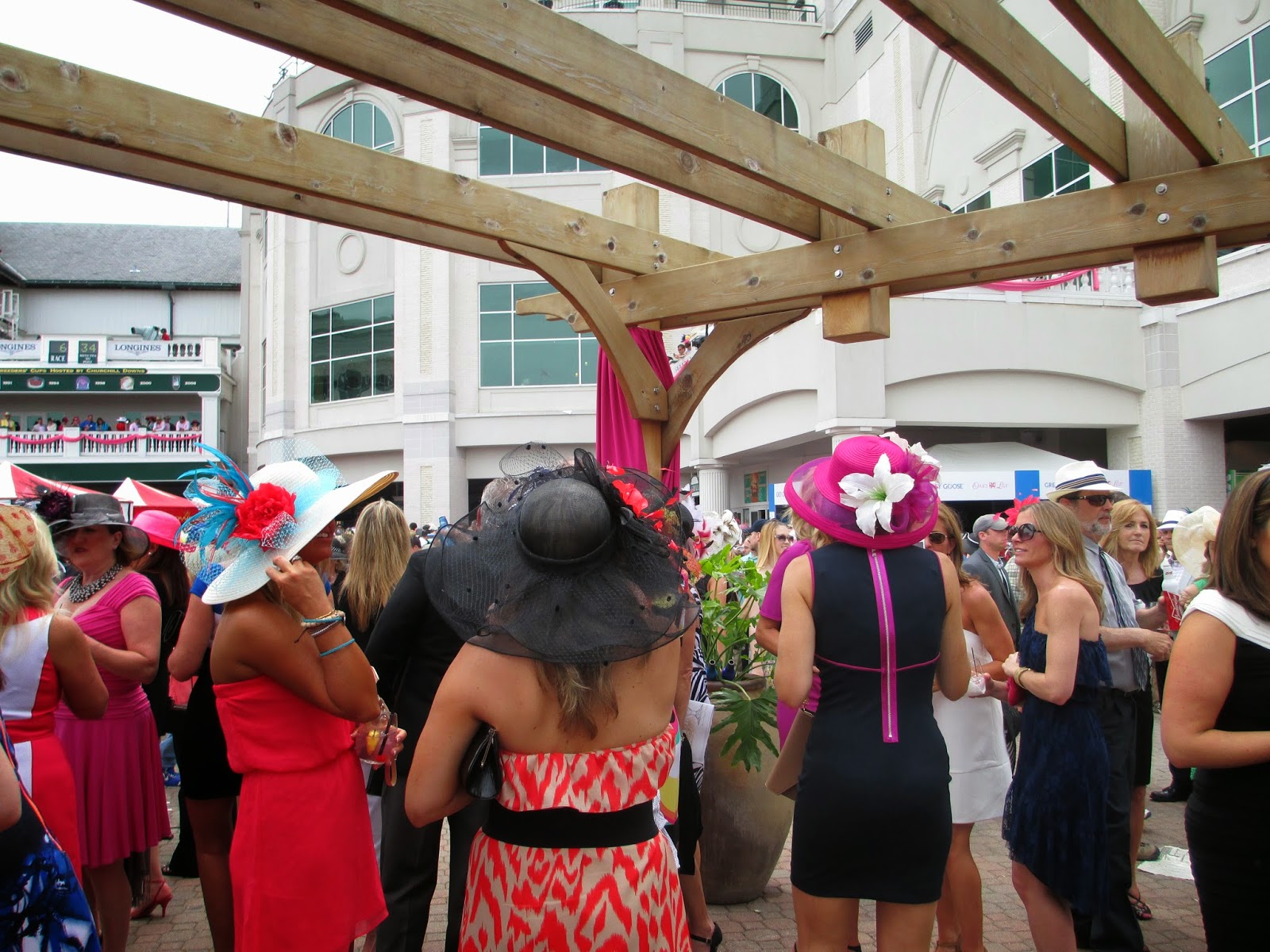 Do You Have Earrings That Match?

Last week I took some new work into one of the galleries that carry my jewelry. They chose several necklaces, among other things, and asked if I had earrings to match.

Um, not for all of the necklaces they chose. But I could in a day or so! 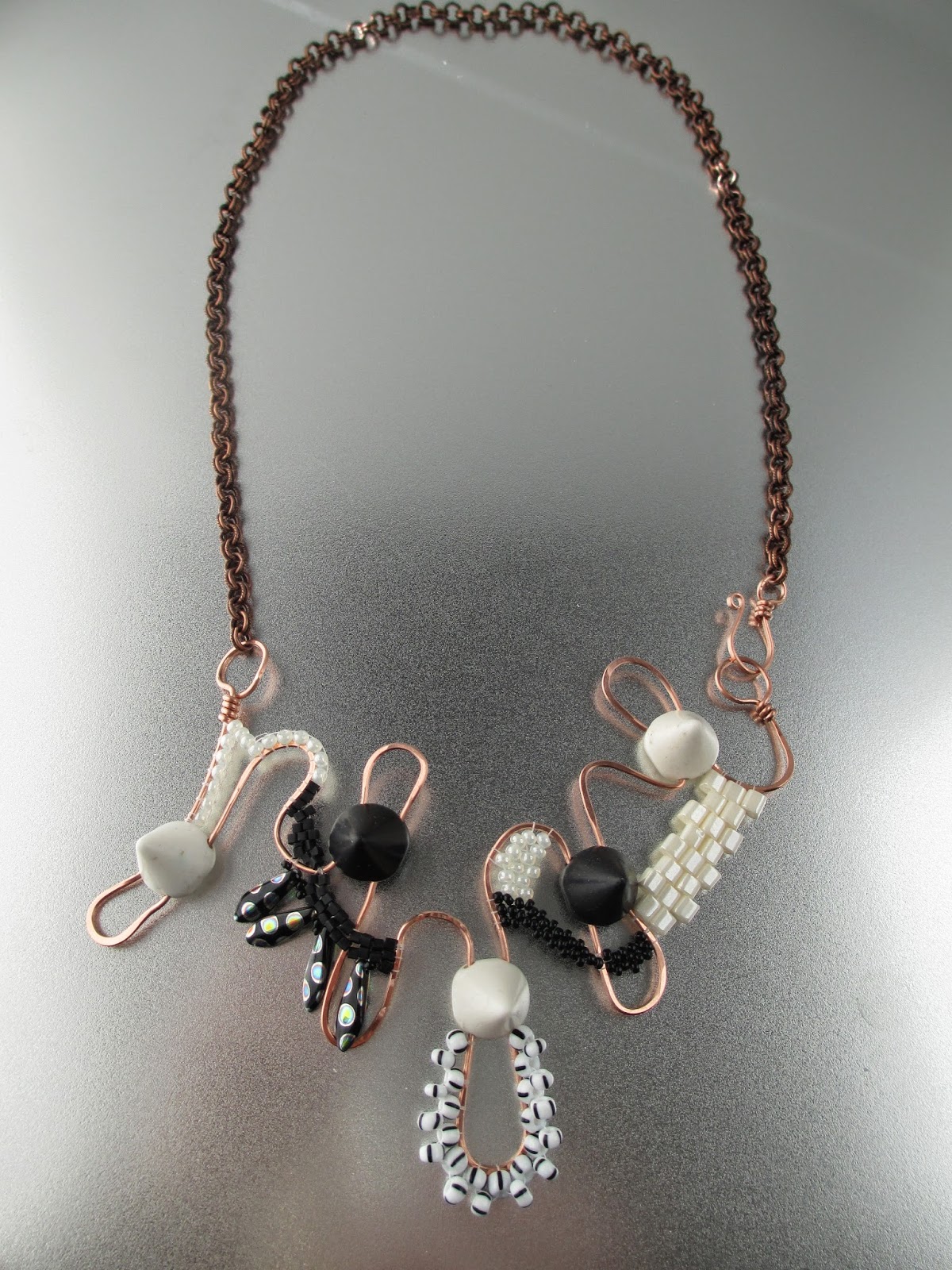 What better excuse to go home and play with the beads, right? This was one of the pieces I needed to coordinate with, and I was extra excited to figure out how to make earrings with the cool howlite double-holed spikes.

Luckily, I had two white spikes and two black spikes left over from the batch Cynthia sent to me. So, because to me, more is never too much, I made TWO pairs or earrings for the shop owners to chose between. 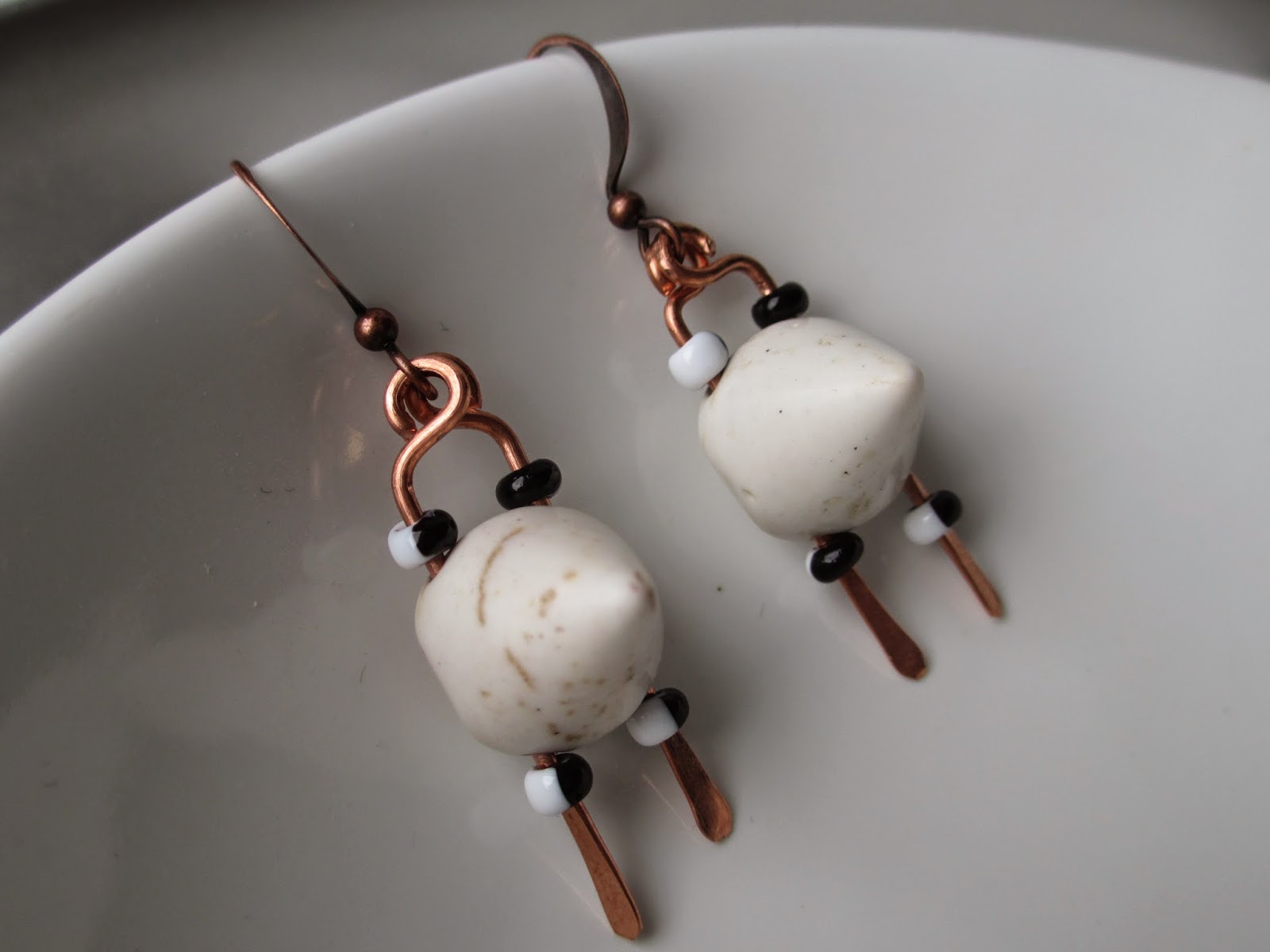 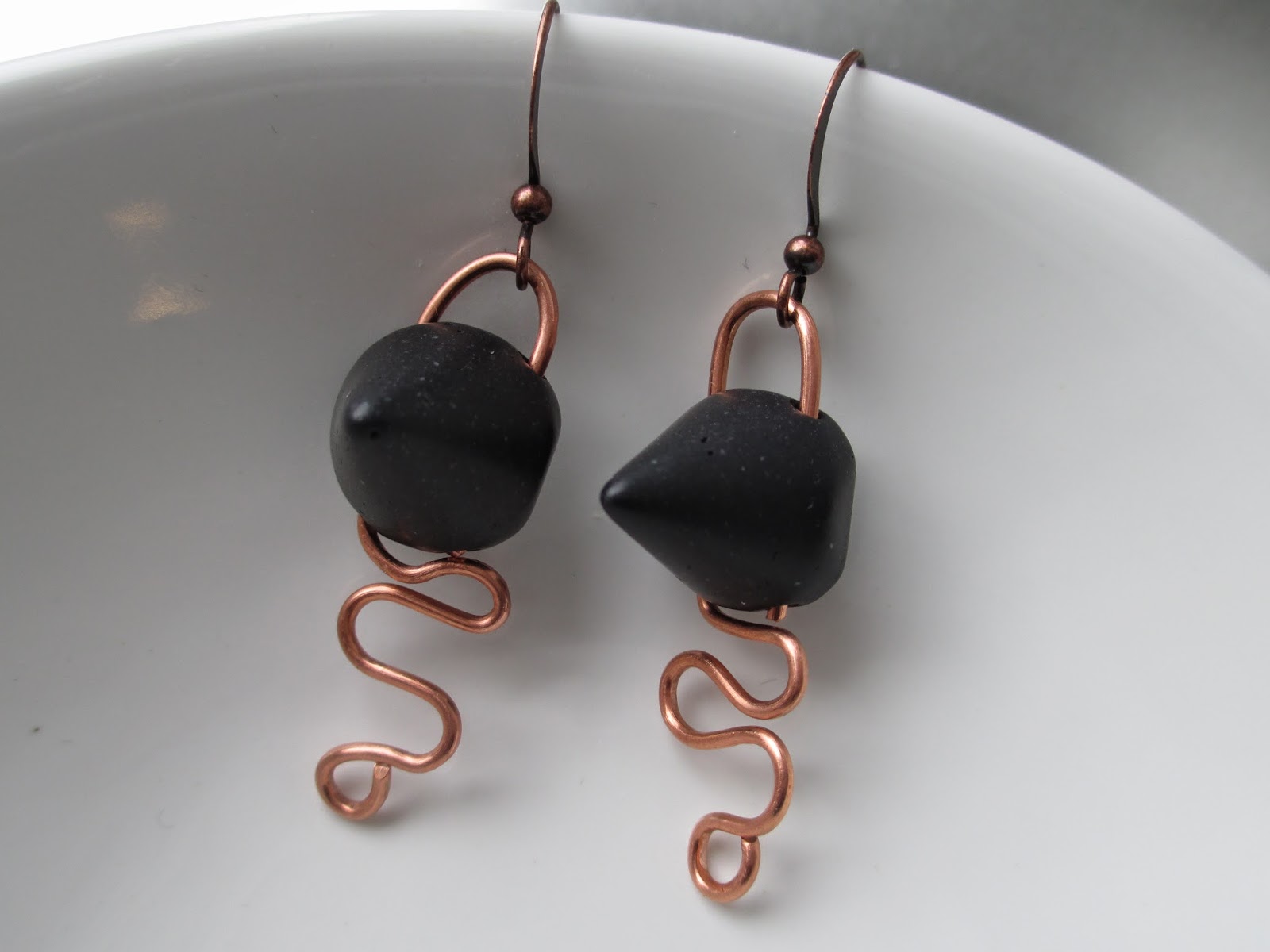 The black pair is now in the gallery. The white ones are mine, at least for the time being!  There were a lot of little pieces of copper wire that sacrificed themselves as I tried to figure out how best to work with the two holes (cross them over above the bead? loop them around? cross them behind the bead somehow?), but I'm happy with the result. Next bead show, I'm on the lookout for more double-holed beads to experiment with!

So how about you? Do you make earrings to match the necklaces and bracelets that you make?  Or do you create earrings you love and then make something else to go with them?