The Voice From the Bead Display 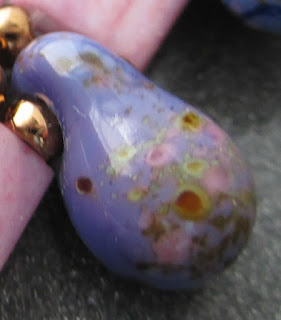 So I'm walking through a bead show recently, when I hear this little voice saying, "Psst, hey lady, look over here!"

It was coming from these luscious little purple glass drops with impressionistic blooms of color on them.  They were sitting, inconspicuously waiting to lure me into dropping some dollars in their direction.

What? The beads never speak to you? I see you nodding your head, so don't even try to deny it.

Yes, they came home with me, and we had a lovely play date.  And this is what they told me they wanted to be when they grew up. 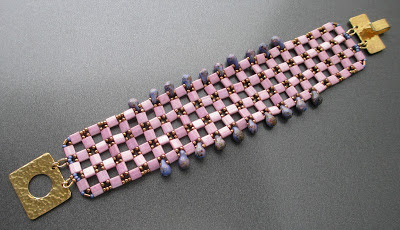 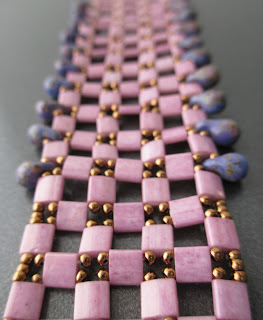 Thanks, Nancy, for the clasp, which was left over from the awesome bead soup you sent me! 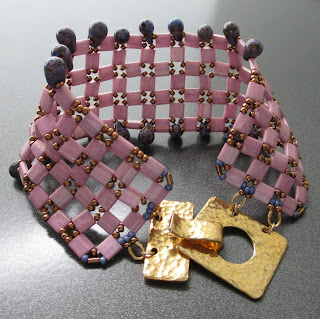 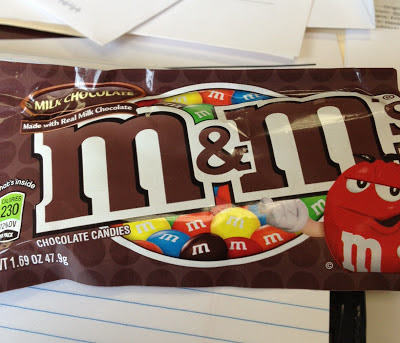 Did I really need to spend 230 calories on a bag of milk chocolate M&Ms just now?

If I wanted to avoid (a) a completely undignified faceplant into my desk in front of my co-workers, (b) slapping someone for no other reason than hunger made me crazy or (c) breaking into my colleague's locked office to raid her mini-Reese's cups stash....then yes, yes, I totally needed these M&Ms.

Don't judge. Although if you could admit that you're craving some now, too, it would make me feel better!
Posted by Bobbie at 2:57 PM 3 comments:

The lovely Therese and Christine have gone and done it again, tempting weavers with a challenge to learn or get reacquainted with some beadweaving stitches in the third Time to Stitch challenge.  This time around we were to make something with a spiral stitch (African helix, Russian spiral or Cellini) and something with a flat stitch (either brick or square).
In my typical fashion, I made grand plans of an elaborate piece that would somehow incorporate all of the stitches.  But the reality of my schedule thought that level of ambition was friggin hilarious, so that plan was shelved for now.  However, I did manage to get a few things done, so settle in and wander down the beadweavy path with me....
First up was my brick stitch adventure.  This isn't a stitch I use a lot, and I wonder why not.  It's quick, it's easy, and who doesn't need a little instant gratification in their lives sometimes, right?  My plan was to make a brick stitch bracelet, adding interest to the basic stitch by using a variety of bead sizes.  I got through one sequence of the varied sizes, and realized I had a really cool ring staring back at me.  So I stitched it up and made another! 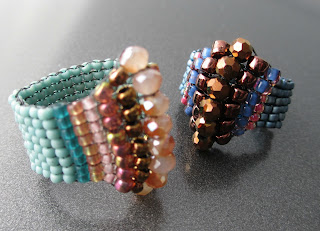 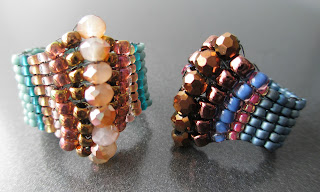 I'll probably go back and actually make a bracelet or two (or twenty) from this idea.
And it was then on to the spirals.  I'd done African helix and Cellini before, so I tackled the Russian Spiral first.  I queued up the video tutorial Therese and Christine had provided, and watched intently.  Several times.  And despite my careful attention, I ended up with a butt ugly mass of seed beads by about the third or fourth row, and I just could not figure out what was going on.  So I'd mutter a little curse, rip the ugly thing apart, and walk away.
Finally, with nerves firmly in hand, beads at the ready, and needle well threaded, I decided to take another swipe at it. This time, instead of trying to work alongside the video tutorial, I printed out a pdf of some instructions.


It still didn't work.  I was starting to seriously doubt myself here.
Until after the 4,000th time I was unstringing after it had mysteriously gone wrong AGAIN at some point during the third round. I looked at the instructions, and realized that the initial stringing pattern is two small, one large, etc...NOT, as I had been doing, three small, one large...
I hadn't felt quite so blonde in a long time.  I shared my experience with Christine, who'd expressed her own frustrations with spirals, and then finished the Russian Spiral, which you can see as the centerpiece here: 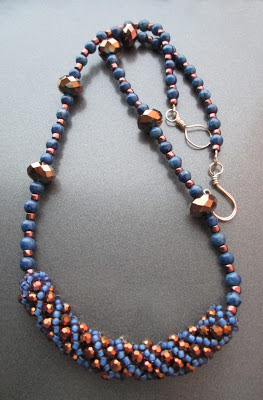 I did have moments when I thought this thing was going to kill me.
Then, just to convince myself that I could do a spiral stitch without losing the precious little that's left of my mind, I worked up a Cellini spiral.  I've done the stitch before, and both love it and realize that it is a giant time suck.  But I really wanted to work in the other color palette I'd selected, so long hours be damned, I jumped in.
It was all good until right before I started weaving the ends shut, when the tube split right along the crystals.  Just like the shorts on a tourist who's had one too many trips to the buffet line before he bent over to pick up that dropped item, this baby split like the seat of a pair of too-tight pants.
Yes, I said some words that would have shocked my mother.  But I got it woven back together, and here's the final spiral: 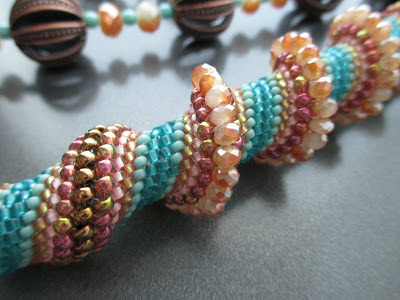 When deciding how to finish it, I was trying all kinds of stringing patterns, but finally realized that it's a bold, substantial piece of weaving that needed a substantial necklace to balance it out, lest it look as oddly proportioned as an ostrich in ballet slippers:
﻿﻿﻿﻿﻿

﻿
So here's the final product, asymmetrial and bold: 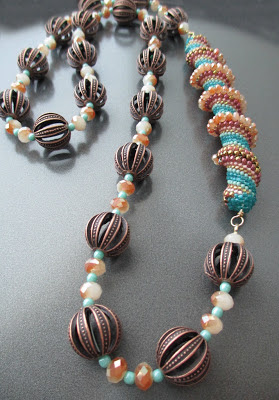 Thanks to Christine and Therese, for stretching our skills, our imagination, and my patience.  And thanks to you for listening to my ramblings.  Now, treat yourself to some beautiful work by the others who participated:
Therese Frank
Christine Altmiller
Maryanne Gross

Diamonds in the Rough

A couple of months ago, the good folks at ZNet Shows invited me to be part of their design team. It's a chance to work with a wide assortment of their cultured sea glass and other wholesale beads.

The latest challenge is "Diamonds in the Rough" -- I was invited to select beads and other components that have gone under-appreciated in their catalog, and make something that might spark ideas for other jewelry makers.  So I chose some things that would challenge me and played!  In case you're interested, the ZNet catalog numbers are included in the photo captions.

The first is a pair of earrings made with some Murano style glass puffed squares.  I dangled some red crystals from gold plated chain, and added them to a jump ring behind the Murano squares.  Easy peasy, but lots of swingy fun.

These Murano donuts are quite blingy, with a silver background.  I dangled these from a fine link sterling chain, and then dangled some ZNet cultured sea glass nuggets from more chain.  I like how the muted color of the sea glass compliments yet tones down the sparkle of the donuts, and the chain lets them swing beautifully.

This necklace combines another Murano style puffed diamond, knotted on waxed linen with these glass quartz ovals in the most ethereal shade of blue.  I also included some of ZNet's barrel spaces and crystals.  The clasp is my own creation.


Finally, I must subconsciously want to go to the beach, because this necklace makes me feel like sand and surf.  The Murano style teardrop is paired with a shell rectangle, knotted simply on waxed linen and highlighted with sea green matte crystals.  Can you hear the roar of the ocean?

I think these Murano beauties would be terrific in bead embroidered pieces as well, and will be breaking out the seed beads to work with them soon.  But the designs above are, hopefully, accessible for beaders of all experience levels, and can be dressed up or down to suit your tastes.  Thanks to Bill and the great people at ZNet Shows for providing me with another chance to stretch my creative wings with their products!
Posted by Bobbie at 6:49 PM 19 comments:

Hats Off Challenge - The Reveal

Today's the day - the first Hats Off Challenge, not so coincidentally on the day of the Kentucky Derby.  The idea is to make jewelry inspired by Derby (or Ascot) hats. There are a good number of beaders in the field today, so pull up a comfy seat, mix up a nice mint julep, and enjoy the eye candy!

As hostess of the challenge, I had hoped to make lots of pieces, including some beadwoven pieces.  Yeah, and life intervened.  So my selection is not as extensive nor elaborate as I might have envisioned, and there is no significant weaving involved, but that means that you can move through this post more quickly and go on to enjoy the creations of the other participants.  See?  Silver lining!

First, my "Inspired By Nature" entry, inspired by hats like these: 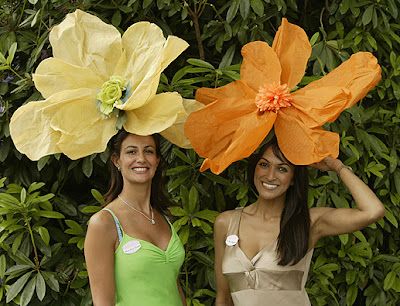 I made these:
For the "Color, Texture and Shape" inspiration, with hats like this: 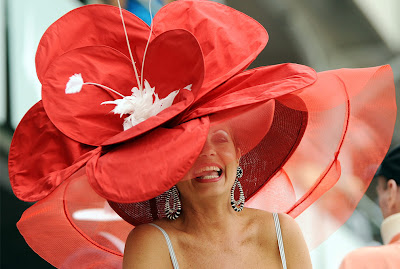 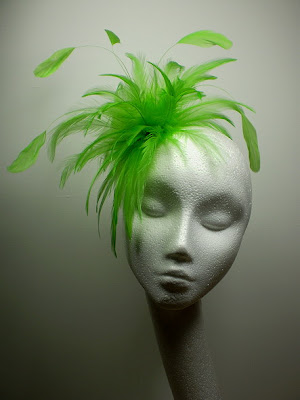 And this lovely hat 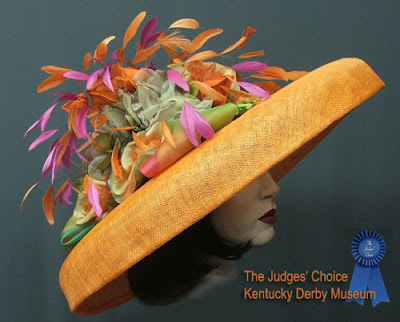 Inspired these (they may be my favorite, I think): 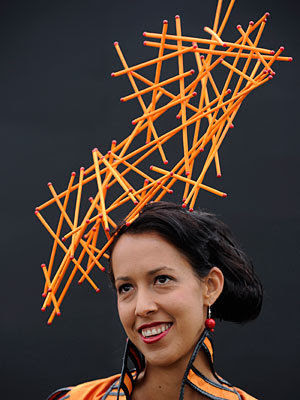 I turned a wine cork into a pendant (because, even though it might fit the Kentucky Derby theme, a bourbon bottle is WAY too big to wear as a pendant!) 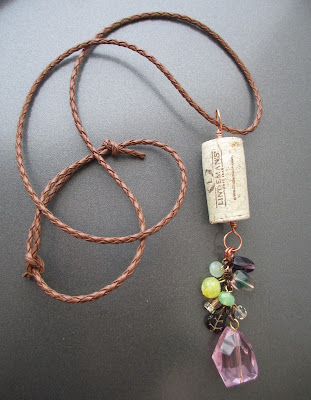 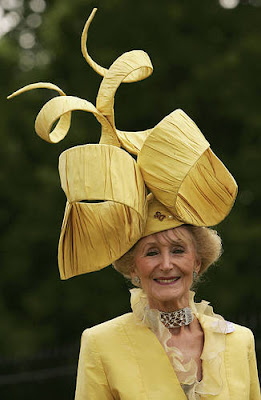 I broke out the seed beads and a spike bead, which I've been so eager to use, and made this: 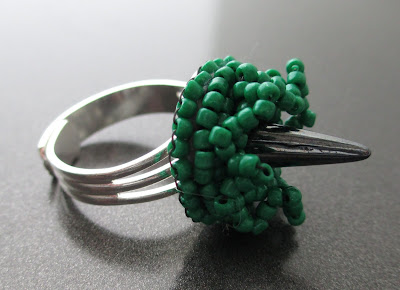 I wore the ring to Churchill Downs today, and look what I discovered --

Thanks so much for visiting - and be sure to visit the other participants.  My hat's off to them!