It's every beader's dirty little secret - that stack of half-finished, reconsidered, abandoned, incomplete, wrongly-turned projects that lie, lonely and unfinished, in the bead room. Our own stash of UFOs - unfinished objects.

Karen Williams, in her wise and encouraging way, brought together a group of beaders to dig into their UFO pile with the mission of finishing one or more of them. Karen's great at giving me a kick in the creative pants, so I had to jump in. Read all the way down, because this one took several turns along the way...

Several years ago, I wanted to build a necklace around a lovely abalone cabochon. The original vision was for one side of the necklace to be a Cellini spiral, with the other side a multi-strand collection of pearls. The Cellini spiral turned out great, but I couldn't get the multi-strand part of lay correctly, no matter how many times I tried. 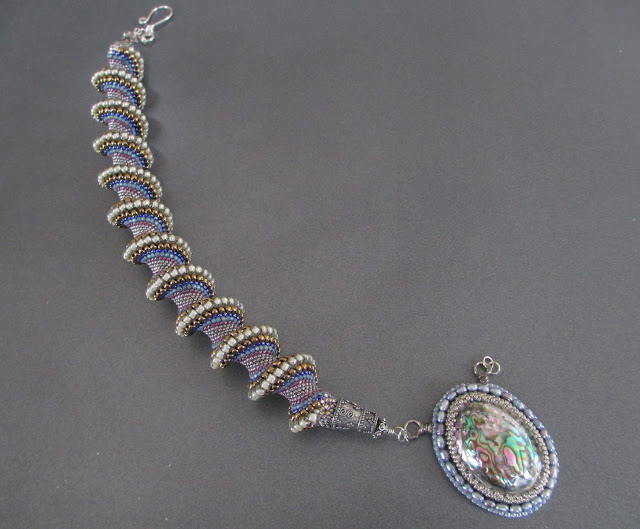 It wasn't ugly, but it certainly wasn't right. In fact, it was so not right, I never took a picture of it. Just took the pearls off and put it aside into the UFO pile.

Until Karen's nudge. There weren't enough of the seed beads I used in the spiral to make a matching side, so that option was off the table. I decided to try the pearl idea again, this time in a braid or other structured format.

But again, it didn't work. This is that version, but this is not the final result of the challenge: 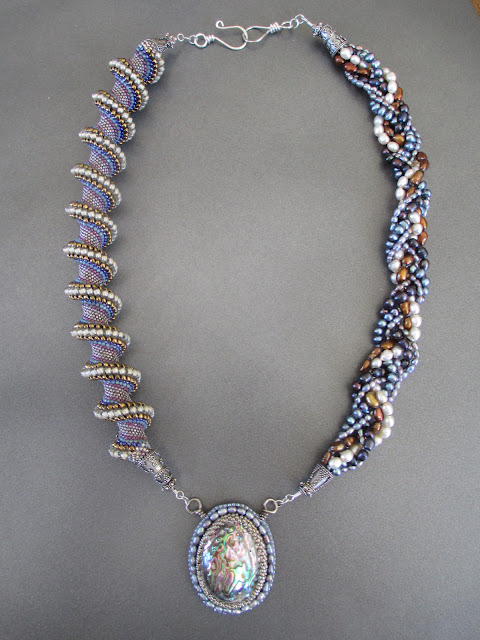 Yeah, again not right. So far from what I had in my imagination.

So what to do? I took a deep breath, picked up a pair of sharp scissors, and cut that spiral in half. 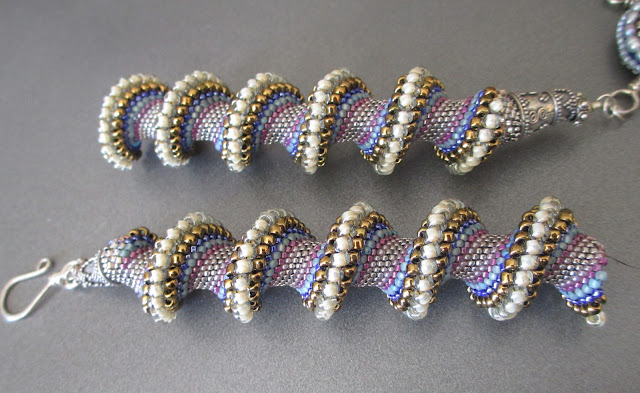 The resulting halves were too short to be a necklace, so I had to finish them off and add a couple of purple jade and sterling silver beads to make a necklace that I could wear without choking. The final version, while not what I had originally imagined, is wearable, satisfying, and most importantly, complete. 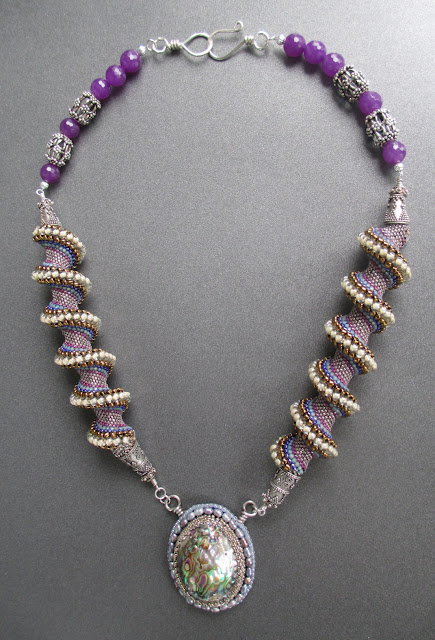 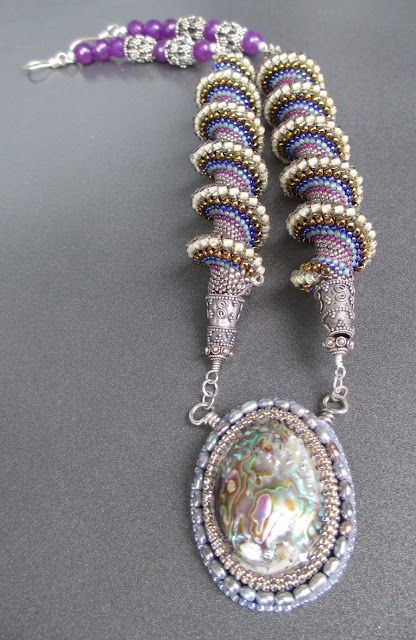 Whew! Thanks, Karen, for providing the motivation and the accountability. Now, go check out what some of my beady buddies have finished from their own UFO collection:

They're every beader's dirty little secret.

No, not the piles of beads that occupy every nook, cranny, and closet in the house.

Not the urge to buy every color of the newest shaped bead. That's not a secret. But it does create the issue mentioned above.

The universal problem is the UnFinished Object. The project that started out great and either hit a creative wall, got run over by the time demands of daily life, or just petered out somewhere along the way.

Karen Williams, the creative genius behind Skunk Hill Studios and Baublicious, put together a blog hop specifically to encourage people to finish and share those UFOs that are lurking in their studios. I dithered a bit and missed the sign up for the first one (dithering may lead to some of my UFOs...). But she's doing it again!!

On May 1, we'll reveal how we've completed one (or more) UFOs.  Here's a sneak peek of what I've got in line to finish. If I manage to get it done early enough, I'll work on one of the other three thousand few UFOs I've got laying around. 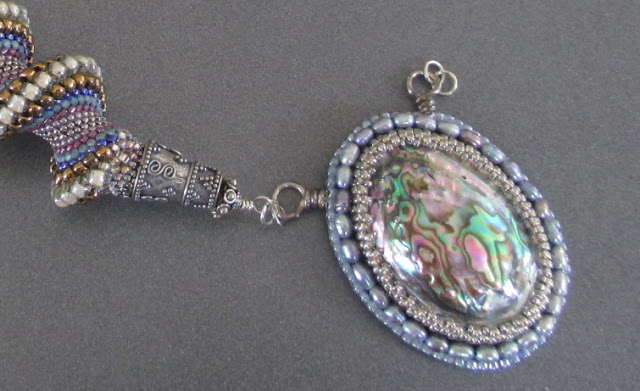 If you're looking for the
Bead Soup Bead Hoarder's Hop reveal,
go HERE!

Move this bead from *here* to *there* and a clunky design suddenly looks perfect. Change the color of a seed bead you're using and the design pops.

So, I try to appreciate visual details and figure out how they enhance the things that they decorate. Over the past few days when the weather has warmed up enough to walk outside without turning into a popsicle, I've played hometown tourist, ignoring the stares of those around me when I whip out my camera to take pictures of some of the details I've encountered.

Coming from a meeting in an 1891 building, I found a well-worn doorplate: 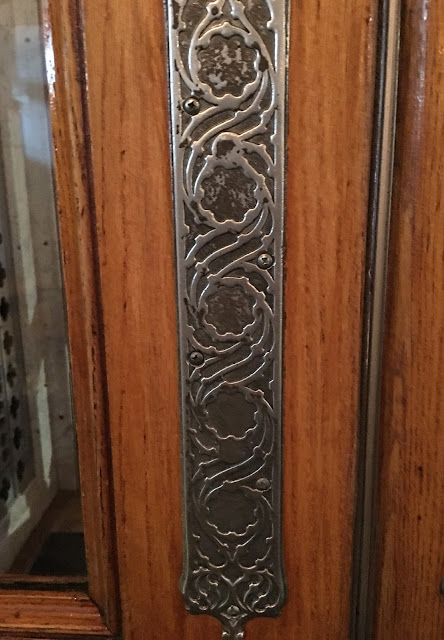 In that same building, an intricate tile floor - imagine how much time and care it took to place each mosaic tile! The tiles themselves are less than a half-inch each. Even as a seed beader, this level of intricacy boggles my mind. 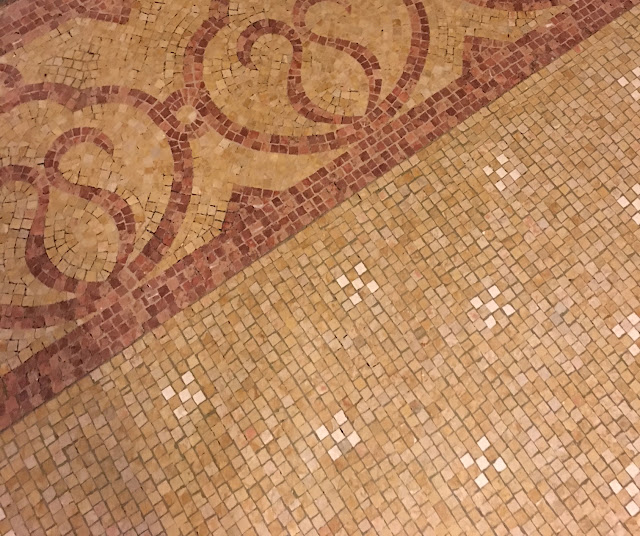 And walking home from the train, I noticed two beautiful bronze ornaments on the exterior of another building, this one built around 1930 - the pictures are just details of much larger decorations: 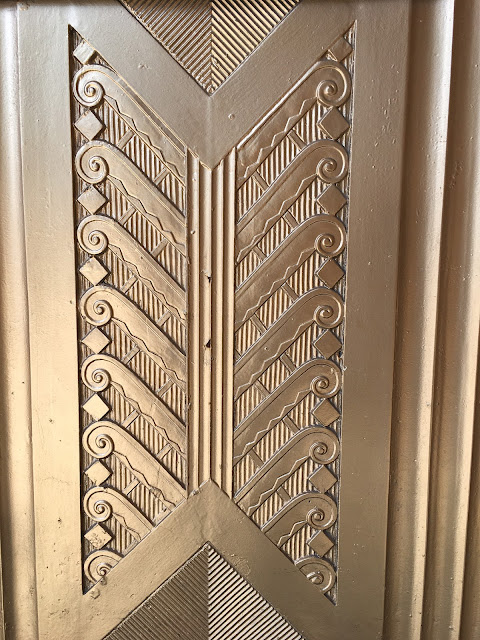 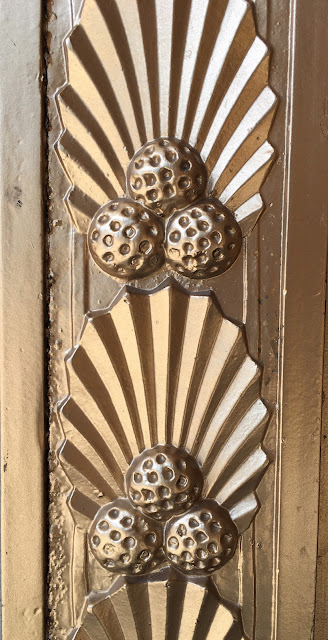 The building would have looked perfectly fine without them, but I imagine the architect and his team deciding that they needed these extra touches to make their building a truly special addition to the city. And I appreciate the artists' vision and craftsmanship.

So, are you a detail spotter like me? What's one of your favorite discoveries around your town?
Posted by Bobbie at 9:11 PM No comments: