Breaking From Tradition - Some Previously Revealed, And Something New

That beady superhero, Cynthia Machata, sent a group of her friends some really cool howlite spikes and said, "Go forth, and play!"

These were bold gemstones. Large, double holed, and gently squared off.  Below is a pair of the black spikes, although I got a mix of black and white spikes. 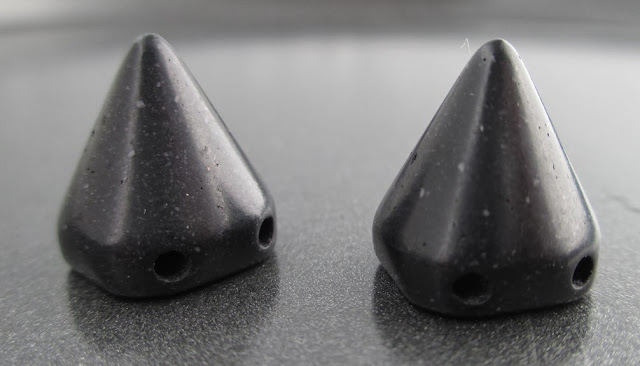 They were far too funky to make something safe and predictable. So I pulled out my funky alter ego (currently taking suggestions as to what my alter ego's name should be...) and went at it.

I revealed the first thing I made a while back.  If you want to read the whole post, here's the link, but here are a couple of pictures: 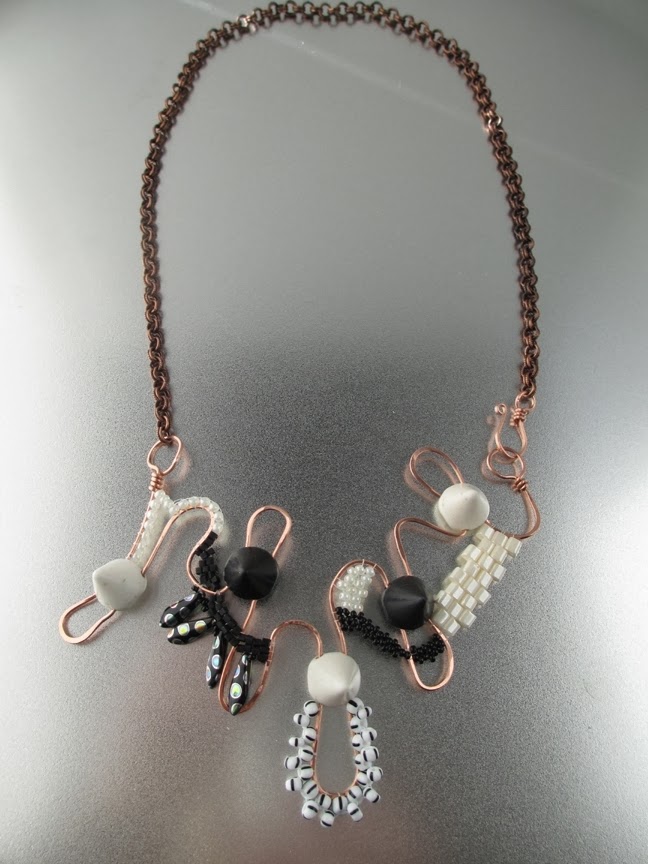 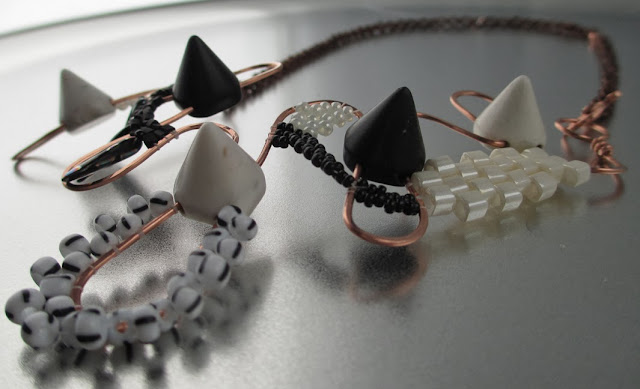 This necklace went to a gallery, where the owner asked that question: "Do you have earrings to go with this?"  Well, no, but give me 24 hours, and I whipped up some options (along with the blog post about it): 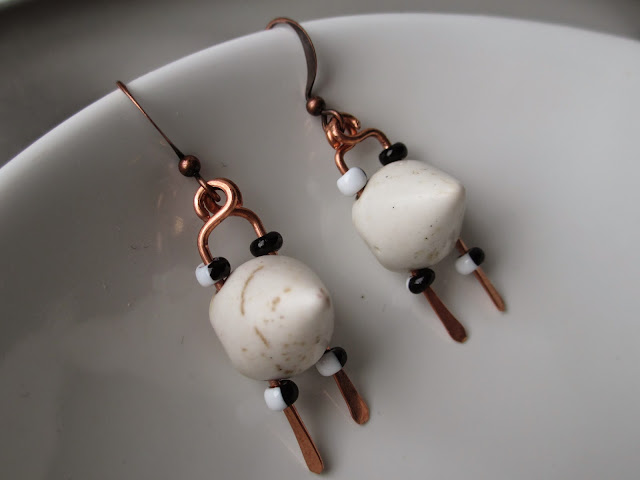 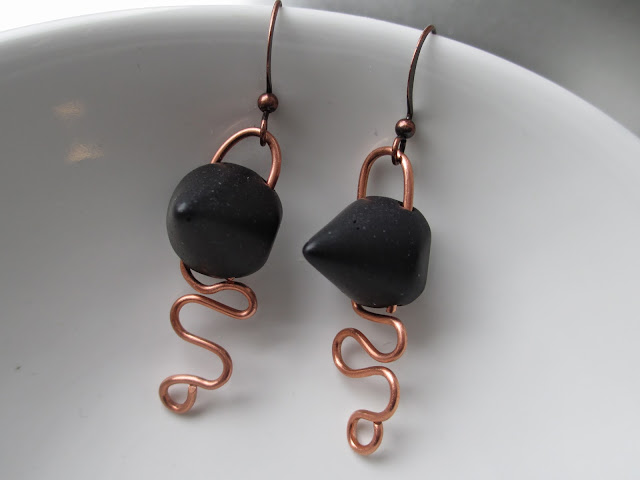 The gallery took the black pair.  The white pair has been among my inventory at my recent art shows, where people have thought they look like chickens, faces, and Madonna's 1980's bra.  The imagination of art show patrons never ceases to amaze me!

Anyway, that left me with two black spikes.  I thought about doing a quick peyote bezel around them to make earrings, but instead decided to join them with a square stitch belt. 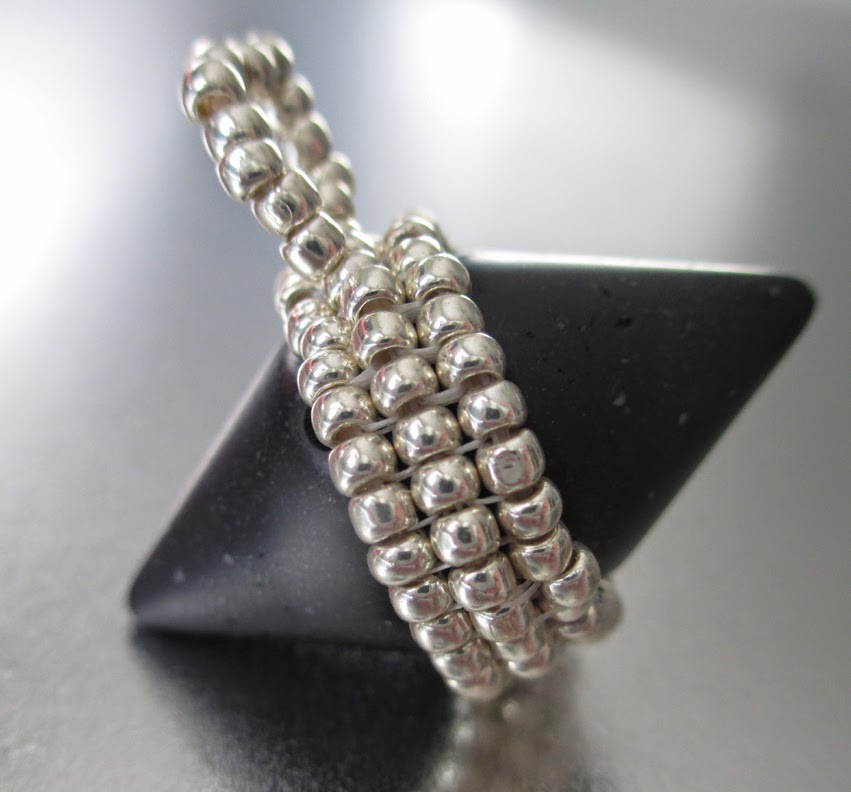 It's a deceptively simple pendant that could go on a leather strand (appropriate for its punky nature), a black cable wire, or a beadwoven necklace (tubular herringbone, perhaps?) Deceptively simple because those suckers got a little squirrely and squirmy when I was trying to weave them together and weave the thread through the holes to keep everything firmly anchored.  Anyway, I love the illusion that I've embellished a larger double-pointed bead, rather than creating it from two separate spikes.

A million thanks, and a million and one hugs to Cynthia for the inspirational fun!  Wanna see who else played along, and what they created?  Here's the list!

Triple The Fun - A Time To Stitch Challenge Reveal 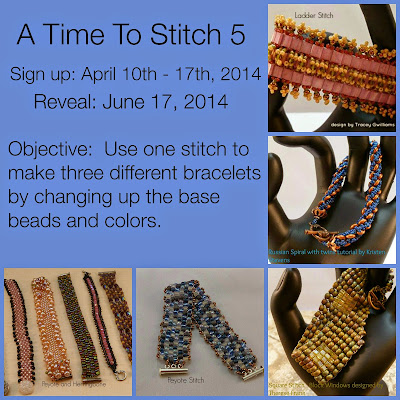 Therese and Christine have done it again! This time, a challenge to take a basic bracelet pattern and switch it up for three variations, changing base color, bead size, etc.

I took my jumping off point from one of the pieces I made for the latest Bead Soup Challenge, specifically the lower section of the neck strand of this necklace: 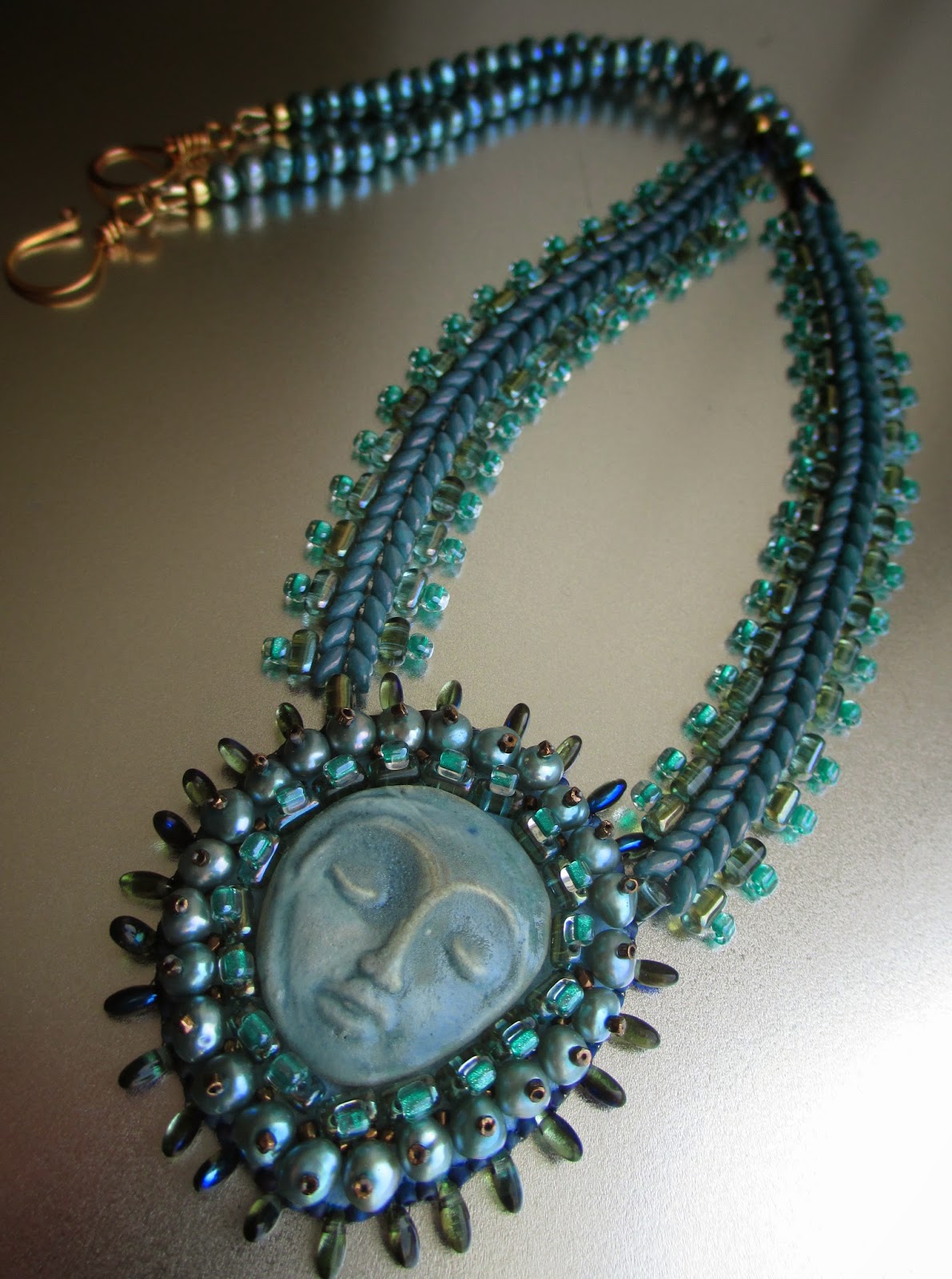 Essentially, it's a herringbone with twin beads, embellished on the side with Czech bricks and triangle beads. Although I doubt I invented it, it was a stitch I developed during the BSBP process, and I was really happy to have an excuse to explore it some more.

Thing is, I didn't have any more bricks (kind of a tila chopped in half) in my stash. (Note to self #1, put bricks on the beady shopping list).  So I chose to use tilas, thinking the translation would be easy.

Not so.  The size was just off enough to make it weird.  Some things I tried were way of in proportion and just flopped around like a beached fish.  Others were just ugly.  So, in the spirit of challenge, I punted (friends, this is the closest I will ever, EVER get to performing a football-related action, aside from those associated with being a rabid spectator).

Here's variation number one: herringbone center with twin beads, edged with tilas and daggers.  I love it. 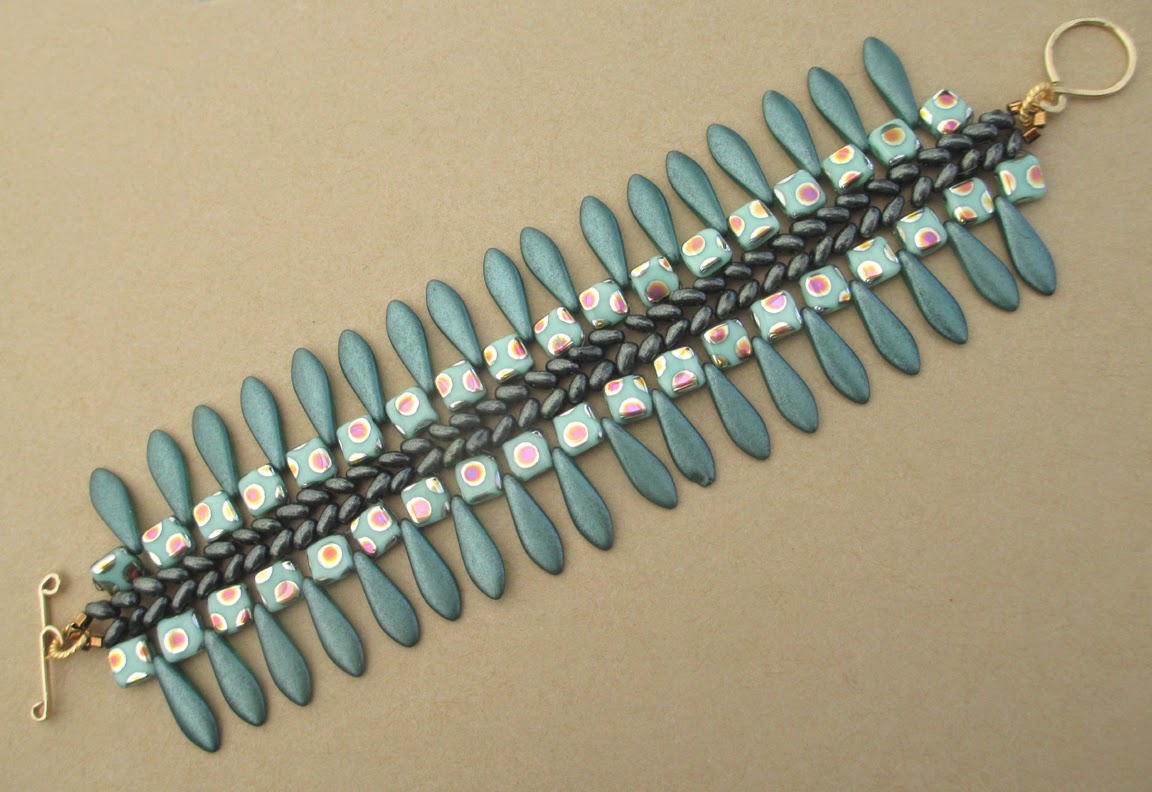 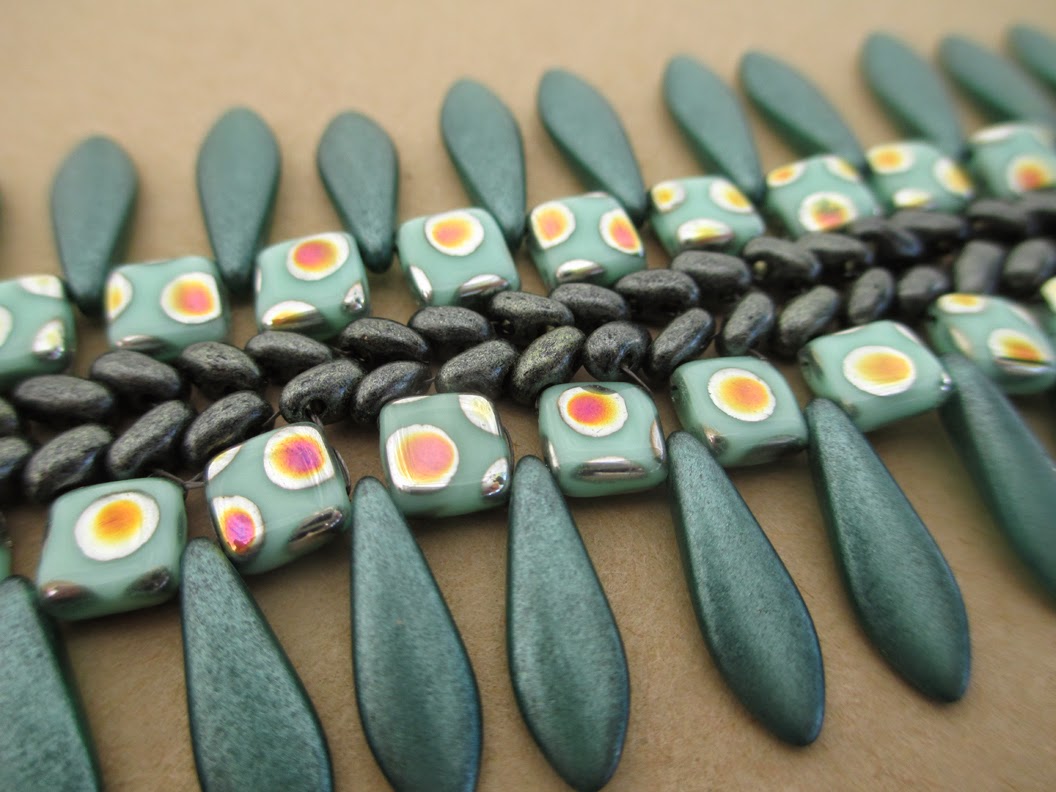 Variation number two, this time with the tilas turned 90 degrees from the first bracelet, and with drops added, mainly because I didn't have enough of those fabulous red polka dot daggers to do the whole length. (Note to self #2: add sexy red polka dot daggers to beady shopping list, too).  I love this one, too, although it's a little more cha-cha flashy than the first.  It would be perfect to wear to an Alabama football game... 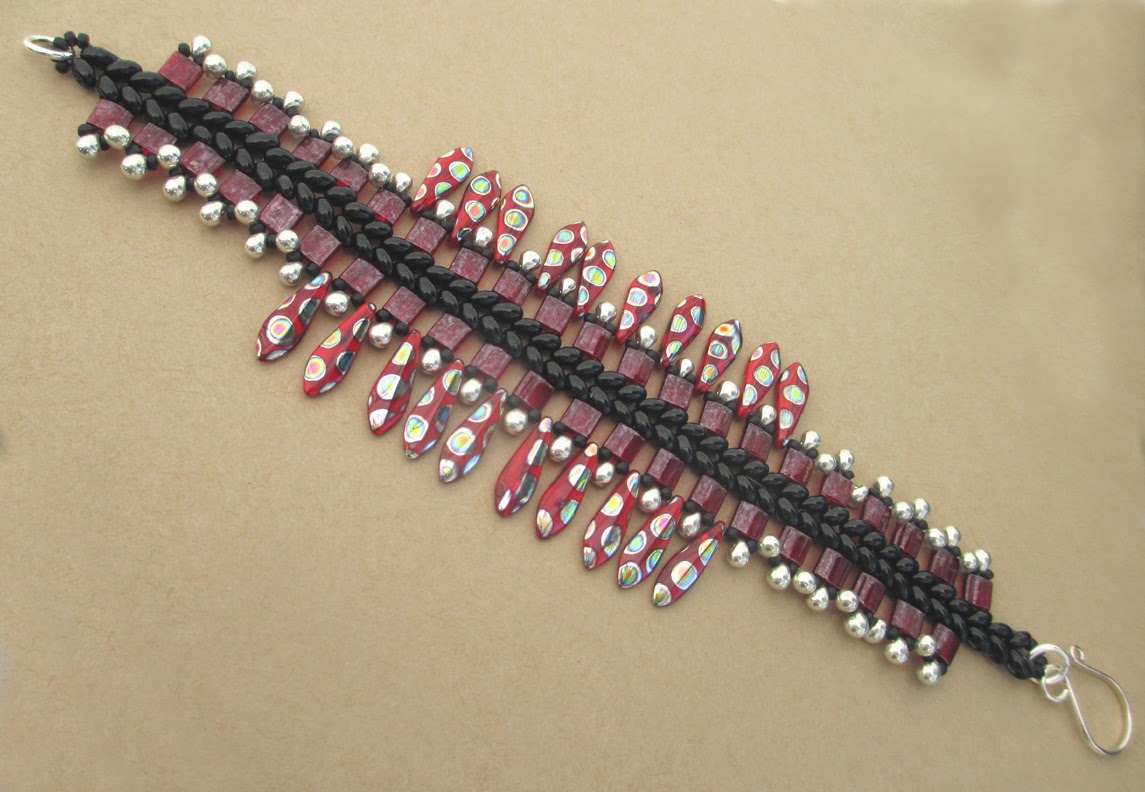 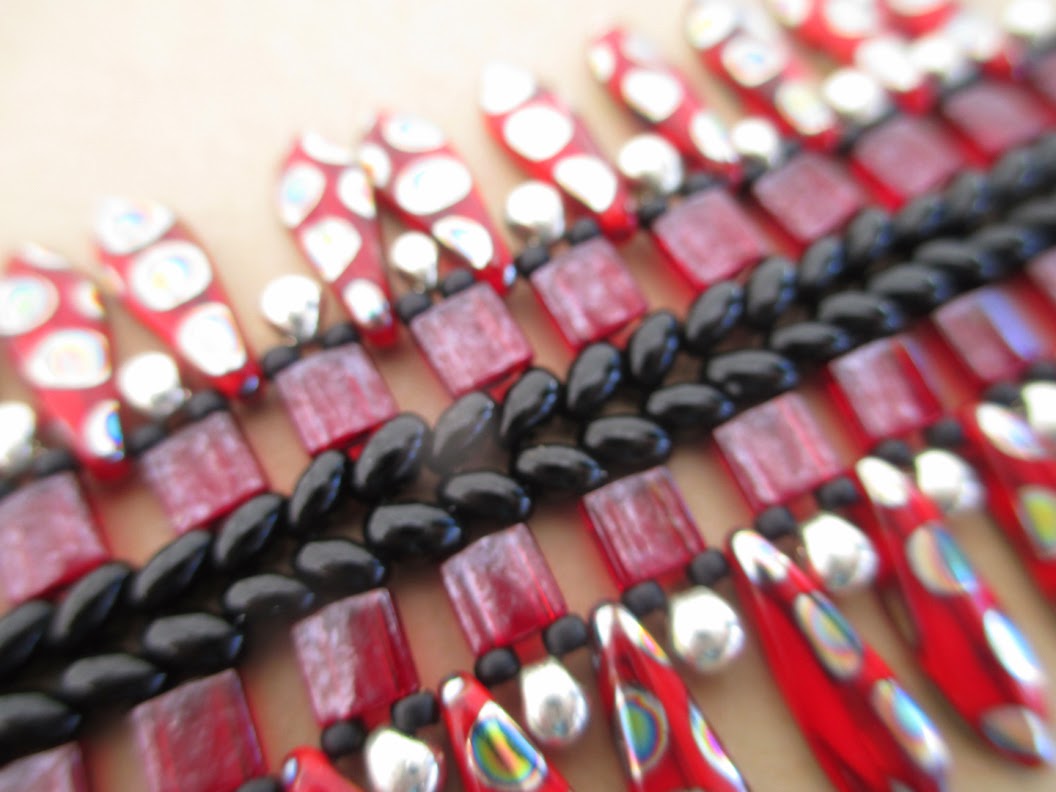 Variation #3 is the most buttoned down, but it's still blingy with the silver twins -- this time a herringbone with twins, tilas, and narrow daggers. While I fabricated the clasps on all three, this is the only one that I made a beaded toggle clasp for.  I wore this one at an art show today, and I can testify that it feels slinky and grand. 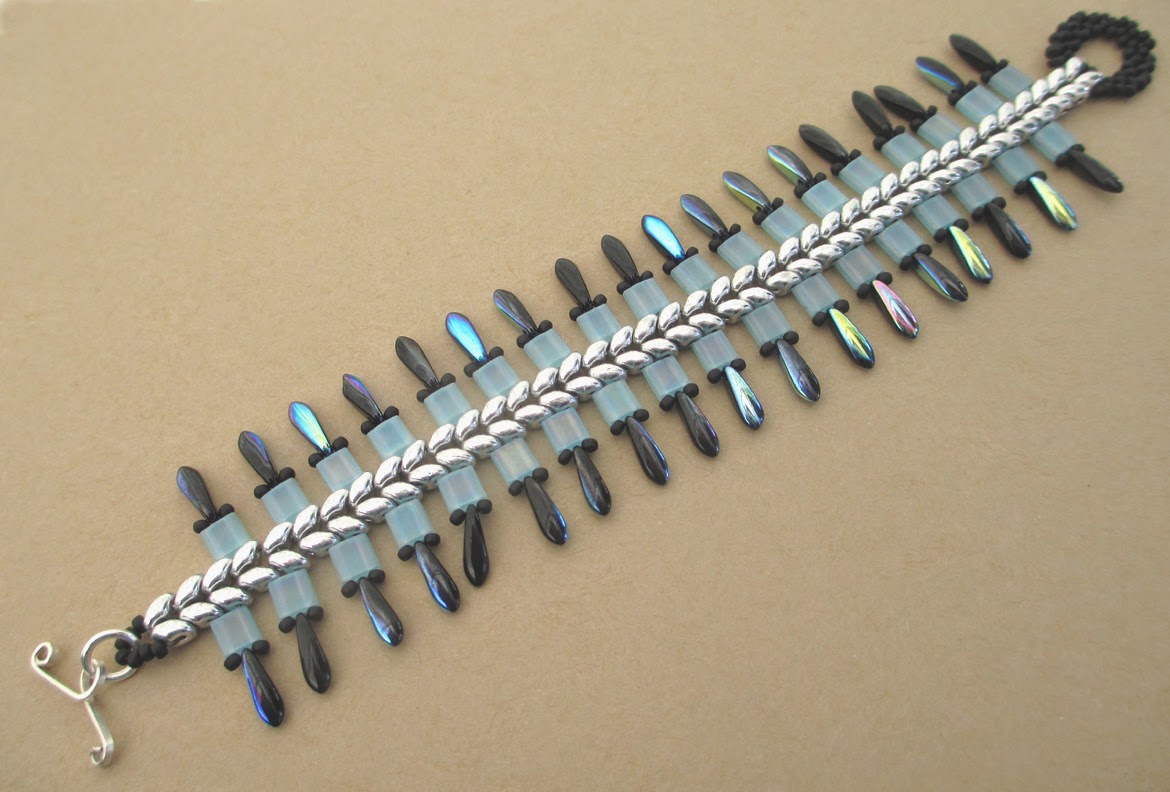 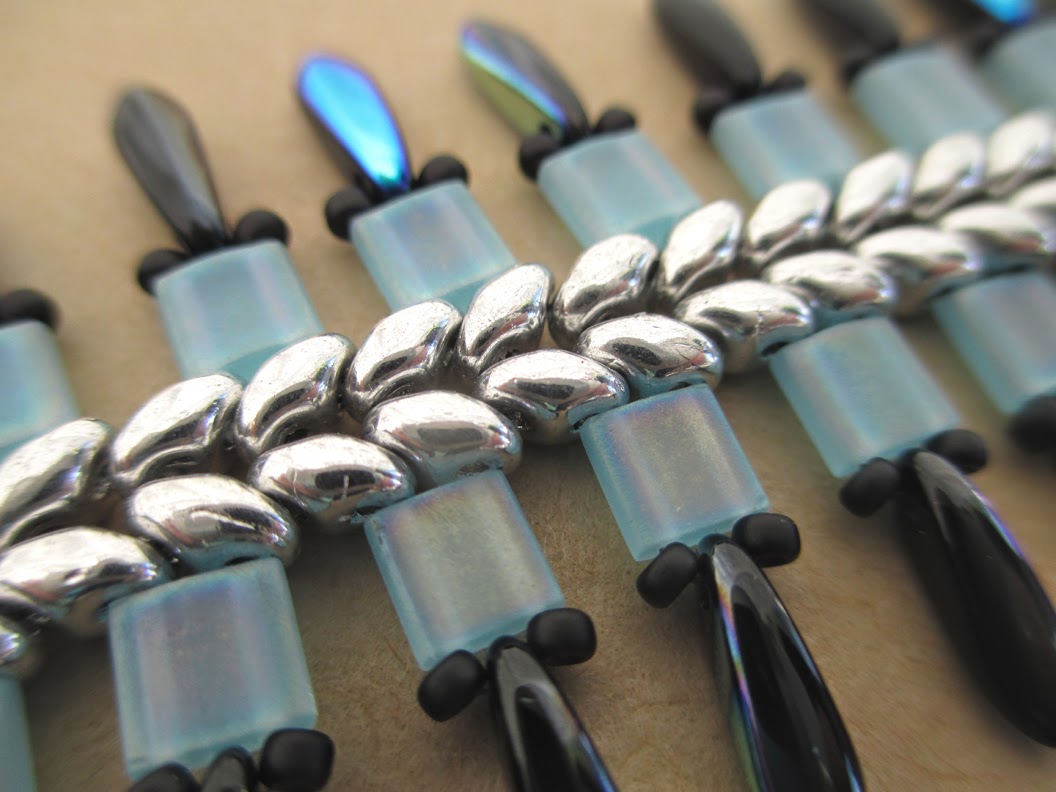 All three together, progressing in order of creation from bottom to top: 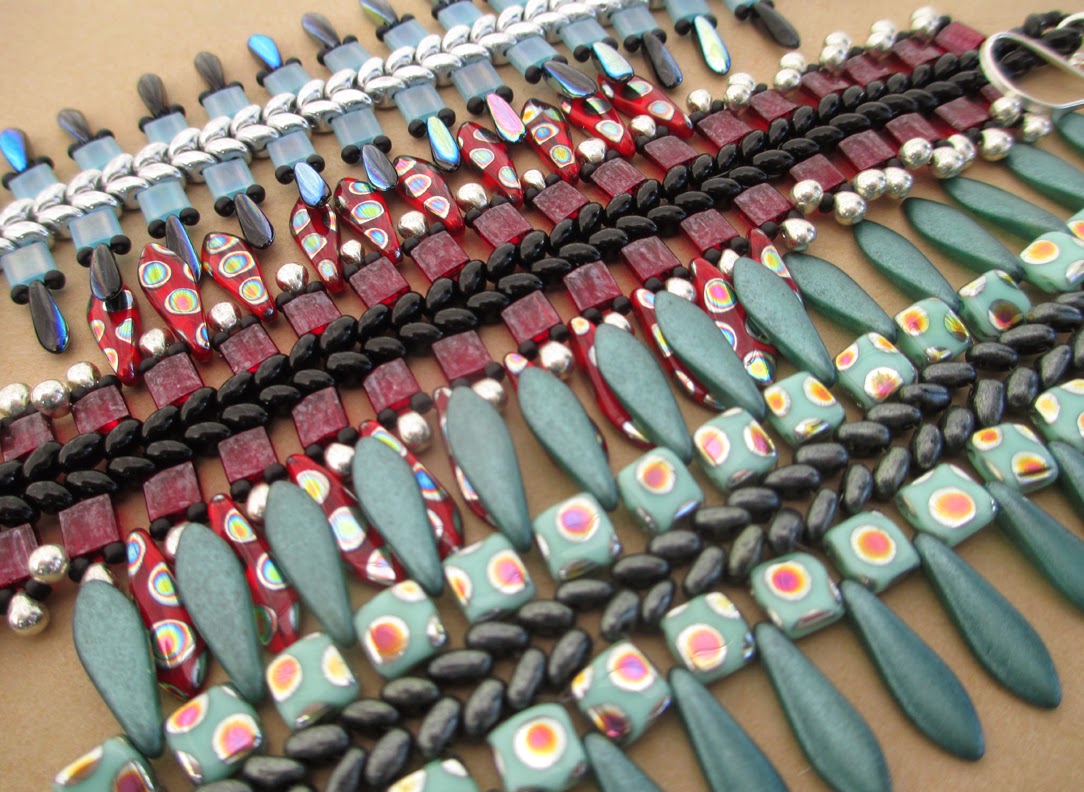 Thanks, Therese and Christine, for pushing my creativity once again!  Here's the list of everyone participating.