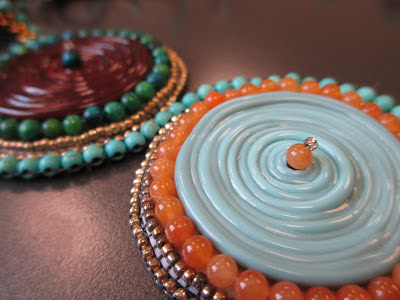 Every now and then, I start a project that becomes, for lack of a better word, a monster.

You know, one of those interesting "what if" ideas that quickly devours your work table.

My latest one has been sitting around in its UFO state for a really long time.  Mocking me.  Taunting me.  Causing me to mutter under my breath like the crazy lady in the neighborhood.  Oh wait, I am the crazy lady in the neighborhood.  Anyway, I was starting to measure the length of time this thing was taking me to complete it in geological terms -- paleozoic, mesozoic, necklacezoic....

You may have seen it at this point: 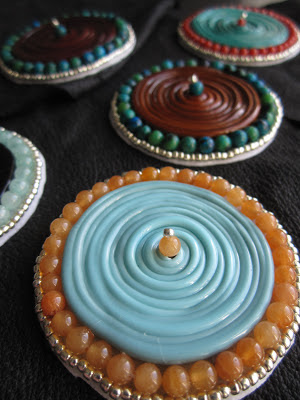 or at this point: 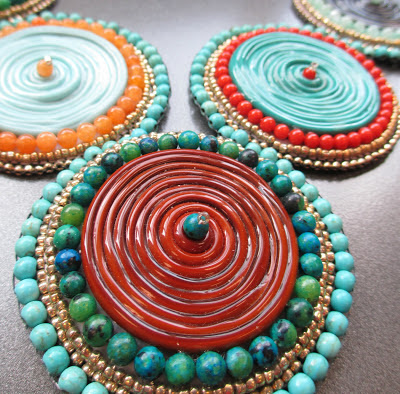 ANYWAY, I had gotten to a point in the monster's development where it was time to add the neckstrap.  I wanted to do something that would echo the swirl of turquoise that winds around the glass discs in the focal. 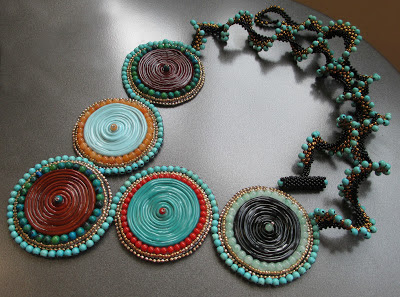 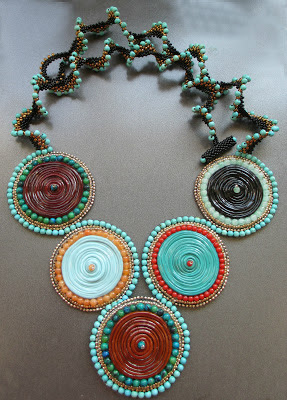 So happy to have tamed the monster!
Posted by Bobbie at 9:00 PM 17 comments:

Wherein We Kick Off The Show Season, Try A New Setup, And Make Some Discoveries

This weekend was the first show of the season for me, a smaller, new (to me) show called Art on the Parish Green.

Arriving at setup, I found I had a corner space - and decided on the fly to change my booth arrangement to take advantage of the additional open side.  I also found that the person whose house I was in front of had cut his grass, kindly sweeping all of the clippings off of the sidewalk.  Right into the area of my booth.  Discovery #1: shopping bags, when used like miniature snow shovels, make a pretty credible grass clipping removal broom.

Usually I have my earring screens at the front of the booth, on either side of the entrance, with the tables set up along parallel to the back wall, with enough room for me to stand, handle transactions, and wrap purchases.  For the corner setup I lined the earrings all along one side, used a screen for extra necklace display, and shoved the tables together to give an island o' jewelry that people could walk around. 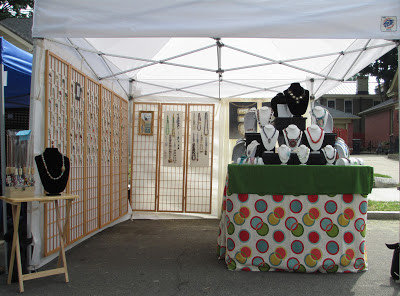 It worked pretty well.  And it led to Discovery #2: Dear Husband, who is my stalwart setup and breakdown assistant when he's in town for a show, was quite patient as I dithered around trying to figure out where things should go.  He's a good guy (but I already knew that!)

I had been thinking of making some tweaks to my earring cards, and I figured this show was as good a time as any to debut the new ones.  Spent several nights cutting, laminating, trimming, punching holes, writing information, and putting earrings on all the cards.  When I went to add the little strip of velcro (the hook side) to the back to hang from my display screens, I remembered that I had finally used up the industrial-sized roll of velcro I had, so grabbed some little hook and loop dots that were hanging out in the craft room.  I mean, hook & look is hook & loop, right?

Discovery #3: Different brands of hook and loop do not necessarily play nicely together.  Saturday morning, I arrived bright and early to put all the jewelry out, and started hanging earrings on the screen, only to see each card sail, gently yet insistently, to the ground three seconds after I attached them.  The hooky parts on the backs of the cards just would not attach to the loopy strips on the screen slats, no matter how hard I pressed, how nicely I pleaded, or how nastily I cursed.

After a few really frustrated minutes that included a fleeting fantasy of calling and waking Dear Husband to make an emergency run to Home Depot (it was still quite early, and even he has limits to his patience), I figured the only way to get the cards to stay was to wedge them between the slats and backing of the screens.  This worked, but the cards were, by necessity, a little at an angle and off center.  You'd think that someone who enjoys freeform peyote and asymmetrical design would revel in this little bit of freeform display, but having my earrings look like a bunch of drunken fraternity boys careening around after a hard night of partying made me slightly crazy all day.


Discovery #4: Home Depot opens at 8 am on Sunday, and you can replace the velcro tab on nearly 100 earring cards in less than two hours if you work really, really hard.

All in all, the show went well -- some really nice art, very nice people, and good sales, which leads to Discovery #5: Challenge pieces often are the first ones sold at the next show. These Adventures in Freeform and Bead Soup Blog Hop #7 pieces were among the works that went to new homes this weekend.
﻿﻿

So, while there were no divebombing bugs and flying strawberries at this show, it did have its adventures.  And it's just the first show of the year!﻿﻿
Posted by Bobbie at 4:30 PM 13 comments:

Wherein We Add a New Show To The Schedule

Here's where I'll be this weekend, with a tent full of jewelry and fingers firmly crossed for good weather:


The show management was even kind enough to feature a piece of mine on their Facebook page:

Y'all, I woke up looking like ten miles of bad road today.  Did you know that a sinus infection can morph into some vile thing that causes your eye to swell shut?  Yeah, neither did I until this morning.

So I'm piled up on the couch, waiting for the antibiotics to kick in and working on getting ready for my first show of the season this coming weekend.  I took a tip from the muffin tin challenge and corralled all the pieces that needed to be priced, tagged, or carded into a loaf pan so that I could transport it to a comfy spot.

Hopefully, the jewelry will look good enough that it'll distract customers from looking at me, in case I still look anything like Muhammad Ali's sparring partner!
Posted by Bobbie at 6:04 PM 7 comments: