How My Car Nearly Got Shot By Fifteen Cannons Today

We're spending a few days in the mountains once again, enjoying the long weekend in a location that's about 15 degrees cooler than home.

Here's our little cabin in the woods... 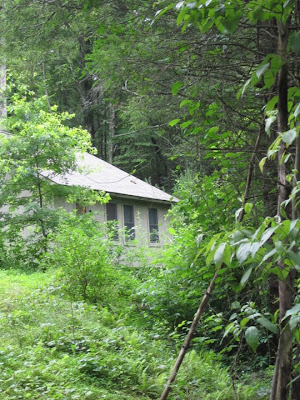 This afternoon there's a 4th of July concert nearby, capped off with a performance of the 1812 Overture, complete with cannons. When he composed the work, Tchaikovsky did include cannon shots to make this musical depiction of the defense of Moscow against Napoleon's invasion even more, um, picturesque. Needless to say, the live cannons are rarely included when the piece is performed indoors. The concert this afternoon is in an auditorium whose sides are open to the outdoors, so everyone who's there is eager to see (and have their eardrums assaulted by) the cannons.

My son drove down to the auditorium early this morning, parking my car to the side near the stage doors. Little did he know that he was parked right next to where the cannoneers would be setting up.

My husband and I went down around noon, only to discover that there were fifteen cannons right next to my car. I mean, less than three feet from the driver's side. Even if they hadn't been aimed at the car (which they were), the concussion from the shots would have blown every window in the vehicle.

Here's a picture from this same concert a couple of years ago - and yes, the cannon you see was in the lineup next to my car... 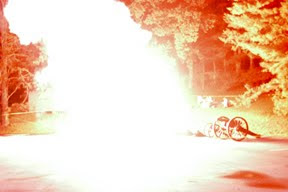 Thank goodness we found my son (and the car key) before the cannons found their target. Whew!

May your Fourth of July celebrations be happy, and much less adventure filled than ours!
Posted by Bobbie at 2:36 PM