The Weekend Art Fair - The Booth, The Golden Arches, and The Ugly Truth

This weekend I was in a local art fair - it was the third year I've done this show, and it's a popular event each spring. So here's the saga...

Chapter I -
The Booth, The Golden Arches, and The Ugly Truth
Set up is always an adventure. I'm always playing around with the arrangement of the booth itself, but this one was fairly close to my last indoor show. Things seemed to come together pretty well. Here's the final product right before the show opened on Saturday morning: 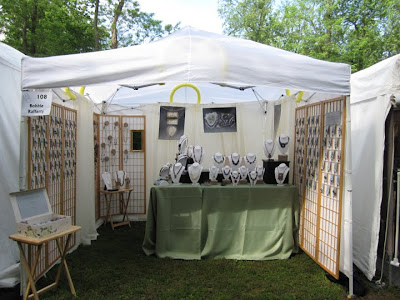 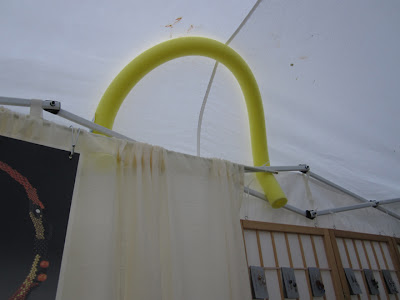 Those are swim noodles. The things you give your kids (or keep for yourself if you just want to float instead of paddle) when swimming. If you have an EZ Up tent as I do, you understand that if there is any moisture in the air within forty miles of your show, that moisture will inexplicably and inexorably be drawn to your tent roof, puddling up into ominous pools that threaten to collapse the whole shebang. Fellow artists at other shows had told me they combat this problem with (a) hula hoops or (b) swim noodles, which they put between the tent frame and the roof to support the roof canvas in the saggy spots.

If only I could find something to do that for the saggy spots on my body....

Anyhow, this seemed like the perfect time to test the concept, since there was a 60% chance of showers on Saturday and 40% chance on Sunday. They noodles looked kind of odd, but I was optimistic. At worst, they would be a great conversation point.

As I settled into my position behind my tables, ready to welcome the hordes (I hoped) of excited shoppers, I realized that an artist's booth has much in common with the old saying about the swan. You know, a swan looks so elegant gliding across the water, but under the surface of the lake, it's paddling like mad. An artist's booth looks great from the front, but behind the drapes and the tables, it ain't so pretty: 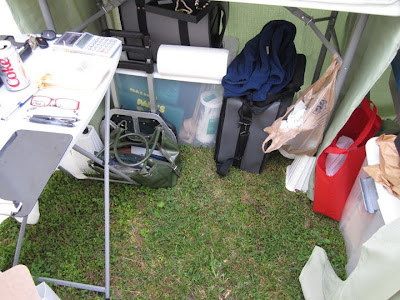 The show opened, crowds were good, and the weather was fine until around 4, when we heard some ominous rumbles of thunder...

And then I got the chance to test the swim noodles. They worked. Then again, it was a relatively quick storm, and even while it was raining, people continued to shop. The day ended up dry, and I had enough sales to feel like treating my sweet husband to dinner out as a reward for being so helpful in setting up. All in all, I was looking forward to Day 2.

Tomorrow's installment:
Chapter II: Wherein We Defy the Laws of Mathematics and Meteorology, and Perform A Floor Show
Posted by Bobbie at 5:52 PM

I hope you had a good show.

If the noodles work and you want them to blend in better with the tent you could always sew a simple sleeve to match your tent.

Was your show in Greenville? great idea by the way!

KJ, I'm ready to break out the sewing machine to make some sleeves for the noodles -- wondering if covering them in plastic might be a good idea to keep them from wicking moisture from the tent in the next rainstorm...

Lisa, the show was in Louisville. I'd love to do a show in Greenville -- I grew up in Spartanburg, so it would be (almost) hometown fun!